By Eyal Hareuveni
February 16, 2008
Sign in to view read count 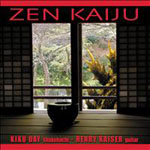 Berkeley-based experimental guitarist Henry Kaiser has gained a justified reputation for his eclectic tastes and the way that he fuses his influences into an idiosyncratic guitar style. He began playing the guitar after listening to seminal free-improv guitarist Derek Bailey and has a deep knowledge of the Grateful Dead's musical journeys, as well as the 1970s electric-era of Miles Davis, as documented in the three volumes of his Yo Miles! band with trumpeter Wadada Leo Smith. He also has a keen interest in musical traditions from around the world, as his musical tours to Madagascar and Norway with fellow-guitarist David Lindley testify. Tokyo-born and Copenhagen-based, Kiku Day studied the ji-nashi shakuhachi—the bamboo flute that is so identified with Zen Buddhism in Japan---and later improvisation with Joëlle Léandre and Fred Frith, with whom she recorded his dance piece The Happy End Problem (Fred Records, 2007). She first collaborated with Kaiser on Domo Arigato Derek-Sensei! (Balance Point Acoustics, 2006), his heartfelt tribute to the late Bailey.

The title of this stunning meeting of minds supposedly represents what Day and Kaiser bring to the table. It defines a clash between the meditative, serene and introspective side of Zen, and the reckless, vocal, violent mutation of the Kaiju—which translates to strange beast in Japanese and refers to the generic name for Gojira, the famous Godzilla and extended family of mutated/strange creatures that starred in a 1960s wave of monster films. It is clear that Kaiser is also an expert in that field; all twelve pieces portray vivid meetings of extremes between all sorts of Kaiju in times when they are called to reflect upon their deeds, in a kind of spin on the Japanese wabi-sabi aesthetic concept.

The most amazing thing about this recording is that both Day and Kaiser are able create a new common ground, one that references the disciplined shakuhachi tradition, but moves onto another plain. In their tight and intimate timbral explorations, Day uses the shakuhachi as a drone instrument, while Kaiser bends and sustains notes indefinitely on guitar. When she slurs or shouts on the bamboo flute, he lightly distorts the sound and squeezes the strings as a metallic percussion instrument. While she investigates microtones and multiphonics he caresses and gently rubs the strings, and when he tries to dictate a vague rhythm she offers sympathetic and subtle dance-like sentences. Kaiser plays in a much more restrained manner than usual, opting for more a precise and subtle extension of Day's language; but such a nuanced approach pays off, since it leaves much more room for the colorful and suggestive sounds of both to linger on.

Day and Kaiser are powerful improvisers with a wealth of ideas and an endless need to open new sonic vistas. This unique recording suggests a new way towards a sonic enlightenment—unconventional, selfless and compassionate as Zen enlightenment, but also a liberating one from our sonic or life conventions and costumes, just as Bailey suggested.

Visit Kiku Day and Henry Kaiser on the web.