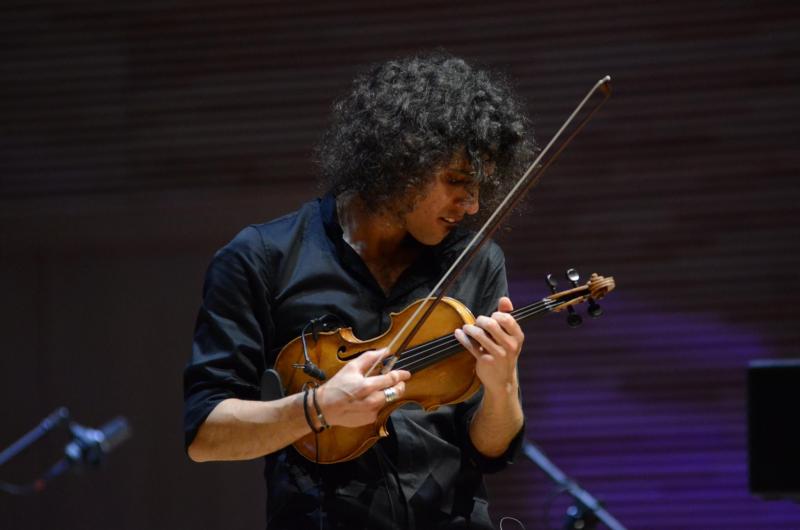 The violinist Zbigniew Seifert was one of Poland's best-known jazz players, who died tragically early, a victim of cancer at the age of only 32. One of the aims of this competition is to maintain Seifert's profile and reputation in his homeland. The dominant mission, though, is to encourage the art of jazz violin in a younger generation, employing a competitive atmosphere to push players towards greater achievements of technique, expression and imagination. Seifert was born in Kraków, so it's appropriate that the gala concert finale was held in his home town, with the semi-finals and final being held an hour's drive away in Luslawice, over three days at the Penderecki Centre For Music. There is a cash incentive, the first prize being 10,000 euros, the second 5,000, and the third 2,000.

Starting out as an alto saxophonist under the spell of John Coltrane, Seifert only began concentrating on the violin at the turn of the 1970s, in his early twenties. Seifert was also a composer, so each short set played by the competitors featured an interpretation of one of his tunes. The competition judges were Janusz Stefanski (an old Seifert drumming band mate in the late 1960s), Mark Feldman (renowned NYC violinist) and Josh Grossman (trumpeter and Artistic Director of both the Toronto Jazz Festival and the Toronto Jazz Orchestra).

On the Wednesday night, the first batch of the ten entrants each presented a short set featuring three pieces, all playing in front of the Pawel Kaczmarczyc Audiofeeling Trio. Yes, it's a violin competition, but cellos are actually allowed, with Krzystof Lenczowski, a local son of Kraków, being the first of the competition's two string-deviants. He offered a pair of originals, strumming up at the neck, making a folksy prance, striding and swaying into Seifert's "On The Farm," as Kaczmarczyc dampened his strings under the piano lid. Florian Willeitner, from Germany, also began with one of his own tunes, followed by a Seifert arrangement, and then a reading of that composer's "Quo Vadis." Willeitner's short, grainy strokes led into a melody, drawn out slowly in a bright fusion style, then into a sweetly skating solo. The middle arrangement was blighted by a poorly chosen pedal effect, billowing as he plucked out an introduction, thickly layered with chorus lapping. The trio sat out for a very soft pizzicato section, before Willeitner opened up "Quo Vadis" alone, before his colleagues gradually re-entered, building up some passion to close. Within seconds of his set beginning, Frenchman Mathias Lévy established a pacing tension, paying greater attention to physically inhabiting the stage, and projecting his sound. He confidently stepped across time-lines, phrasing and flying freely, as he visibly transmitted energy towards the trio, who responded with greater engagement, coaxed into upping the intensity. Lévy was unusual in his concentration on the ancient tradition of gypsy jazz, which was largely ignored by his fellow entrants, in favour of a vaguely fusion-dominated orientation. This was to work against him in the judging, a few days later, it seemed. Another entrant who understood the value of an individualist presentation was Mario Forte, delivering at speed, with great dexterity, flamboyance and a predilection for decorative flourishes. For his arrangement of "All The Things You Are," Forte soloed whilst the trio made brief percussive punches, before the tune took off on a familiar glide. He too encouraged a hiking of energy within the trio, goading them into taking their own rousing solos. Forte set up some plucky loop tracks, adding his own sliding basslines, topped by a 'conventional' solo, sawing swiftly, bending and stretching phrases, then adding a warping effect to climax.

Thursday brought a second bunch of fiddlers. Another Polish contestant, Marcin Halat, operated a suspended circulatory movement, his own middle ballad piece being very conventional in nature. For Seifert's "Pinocchio," he took the melody as an ongoing solo, continually in flight, becoming stormy as he increased the string friction. This was one of the best Seifert realisations so far. The Austrian Florian Sighartner tipped in klezmer hints for his abstracted original, crammed with much vibrato and slurring of phrases. Stephan Braun was the other cellist entrant, hailing from Germany. He began by playing his axe like a guitar, across his knees, boldly plucking, as Dave Brubeck's "In Your Own Sweet Way" was negotiated with the cello in the expected upright position. For much of the set, Braun sounded quite tuneless, his tone lacking warmth and richness, with a slightly tart edge. A player who lacked the required onstage thrust was the Spanish Apel.les Carod Requesens, who has been studying at New York University, and who came second in the 2014 Seifert competition.Opting for maximum melody, his singing sensitivity came out during his original work, a mournful procession through Seifert's "Quo Vadis" (a popular choice), making grainy wind-sounds, lightly bowing out harmonics. Closing the second night's semi-finals performance, Mateus Smoczynski, another Pole, made a harsh, glancing attack, swinging out a bluesy "Man Of The Light," another oft-selected Seifert tune. His soloing featured a great deal of detailed embellishment, percussively razoring, with a classical echo-vibration developing the impressionism of his second piece, working towards the closing "26-2," as if Stephane Grappelli was aping its composer, John Coltrane.

The Friday finals arrived with the initial entrants being cut in half, chopped down to five remaining artists. Smoczynski opened, providing a bold start, upping the game with some searing runs. His first strafe was equivalent to one long solo that never let up, but eventually there was a recline into ballad territory, then jumping back into a racer for the conclusion, violin in dialogue with drums on "Turbulent Plover." This same number appeared straight away, to open Braun's set, in a cello incarnation. He moved towards a sparse pizzicato section, then inflicted a battering action on the strings with his bow, creating a percussive momentum, making curt, contained cuts, and then rapping the instrument's body with his fingertips. This was the time to extend outwards, knuckling the real surface. Willeitner played "Nardis," penned by Miles Davis, clicking on an effect that cloaked his violin with an accordion surface. Then, for his last number, a country hoe-down chase was initiated, the trio sitting out, his solo peaking with long, sliding strokes, high, keening glissandi. Requesens offered a granular hesitancy, a bass drone shaping a sombre mood, a choice which didn't seem wise when standing on the killing floor of the final. Fortunately, his second piece was brighter, but there was still a deceleration involved, a technique preferred by Requesens, as he drifted into slow motion. Forte finished off the performance, with finger- strums, ukulele-style, then played Dave Holland's "Herbaceous," and went on to create another one of his looped accumulations, the top layer of "Lost Banana" complete with a skewed wah-wah crunch. It seemed that the general feel of the evening was a lot more inflamed during this final encounter. The entrants probably hadn't deliberately hidden their full potential fire during the previous two nights: this was doubtless a simple result of adrenalin rush.

After what was surely a lengthier-than-expected deliberation, the three judges reached their decision, late into the night. There was some degree of disagreement and controversy, as there was a lack of clarity and decisiveness in the final results. The three main cash prizes were given, but the second place was divided between two competitors. One player who emerged with nothing tangible was Mathias Lévy, who was actually one of your scribe's chief favourites to win. It's also arguable that the first and second prizes should have been contested by Smoczynski and Forte, with Requesens and Willeitner tussling between themselves for the 3rd Prize.

Following the announcements of the prizes, the Saturday night gala concert offered a chance to indulge in pure artistry, now that the technical, competitive pressures had relaxed their grip. The winners were set to appear as soloists with the Konglomerat Big Band, at Manngha in Kraków. This was a relatively small gathering, with much of the audience having some kind of relationship with the competition, but it was more of a natural gig-scenario, where the assembled could directly immerse themselves in the music, all tensions having now been released. Unusually, all of the band's horns were arrayed in a large semi-circle, this being their accustomed set-up rather than a pattern enforced by lack of stage space. It made a refreshing change from the standard reeds/trombones/trumpet tiered ranks. Forte appeared for an Afro-centric number, establishing a variety of thrusts in a single solo, sawing and sliding with fluid outbursts. Requesens made an opening foray that was quite jarring, but this could have been due to the head-jellying volume of the massed forces. Willeitner's "Song For Christopher" was muted, with the band's glowing trombones taking up much of the attention, the violinist becalmed in a tranquil state. Smoczynski's "Where Are You From?" was a spirited rendition, ending with some emphatic bass, and a lightly stroked violin solo. Following three evenings of hearing the violinists being backed by the Audiofeeling trio, the big band framework sounded highly refreshing. There is no way that a listener would have ordinarily chosen to subject themselves to so much violin action over a period of four nights, but this was a competition, of course, and some very specialised listening rules were in place. Nevertheless, it was almost revolutionary to remember, following a few days of isolation at the Penderecki Centre, that brazen horns still existed in the outside world!