BY IAN PATTERSON
August 5, 2012
Sign in to view read count 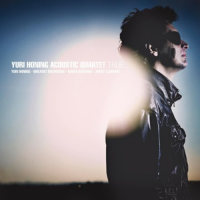 If the dust of jazz history ever settles, saxophonist Yuri Honing may well be looked upon as one of today's trailblazers. As the debate limps/rages on (take your pick) as to what jazz is or should be, it seems clear that more and more young musicians with a deep respect for and knowledge of the tradition and its language, feel nevertheless unbound by convention, and open to all music as a source of inspiration for their creativity. Honing has been delving into pop music—and many other sources besides—for over a decade and a half. True marks an all-acoustic studio recording for the first time since his captivating Middle Eastern odyssey, Orient Express (Jazz in Motion, 2002), and offers striking originals with a couple of interpretations of pop numbers.

In step, True explores more spacious, meditative music, where rhythm is minimal, notes are sparse and Honing's soul-piercing melodicism is core. A suite-like, melancholy thread binds these compositions and quietly urges uninterrupted listening for the 45-minute duration. Lijbaart's simple beat throughout the plaintive title track exemplifies the sparseness of much of the music on True. Honing tenderly delivers the beautiful melody, with deft, blue counterpoint from pianist Wolfert Brederode. Honing's solo carries maximum economy and great emotional weight, so much so that the main melody's return is balm-like, gently lifting the spirits anew. English art-pop duo Goldfrapp's "Paper Bag" has a livelier beat and darker ambiance but grows from a similar root of melancholy. Gaining slowly in potency, Ruben Samama's throbbing bass pulse and Lijbaart's sharp beat propel Honing on a measured, powerful run.

"Bring Me the Discoking"is a delightful reworking of the David Bowie song of almost the same name, and a more pop-inflected effort than Bowie's jazzier original. The singer has inspired Honing before—Wired Paradise interpreted "Space Oddity" on White Tiger—and Honing dances passionately on soprano to one of Bowie's last great fires. Honing mines melodic gold from the two covers and proves that there is ripe material for interpretation beyond the confines of Lennon & McCartney, Nick Drake and Paul Simon.

Brederode's harmonium combines with bowed bass and the leader on tenor to create ethereal waves on "End Of Friedrichsheim.." This slow elegy, along with "Paper Bag (reprise)" and "True (reprise)" form a chain of meditative islands, almost glacial in their melancholy sense of repose. Dreamy abstraction colors the intro to "Borchardt," and even Honing's bright soprano voice cannot quite dispel the underlying chill in Samama's whispered, bowed bass tremolo, which conveys—and almost produces—shivers up the spine. The song fades, but bass drum, the faintest touches of piano and breathy sax keep the embers glowing in a feather-light coda.

"Yatsuni" eschews drums completely, and bass is reduced to a vague presence on another atmospherically charged number. A slightly spooky piano intro of a contemporary classical air paves the way for Honing to deliver a sympathetic reply—minimal and mournful. A little post-production produces subtle sci-fi affects throughout, which add to the sense of weightlessness that the quartet conjures. Resolution only comes with silence. By way of contrast, Samama's "Nobody Knows" is a more up-tempo number; the bassist's pulsing groove and Lijbaart's rim-shot rhythm are central to this buoyant number—a vehicle for one of Honing's most authorative tenor statements of the set.

"True (reprise)" closes the album on a brooding note. A heart-like bass pulse anchors this minimalist meditation, with Lijbaart's slow-beat rhythm returning briefly to punctuate the icy clusters of piano notes that accompany Honing's quietly keening tenor. His long, stretching notes share something of the tonality of Norwegian tenor player Jan Garbarek, with whom Honing also shares the knack of employing silences as a powerful additional voice.

These very simple, beautifully honed tunes exert an unyielding gravity, to draw you closer and pull you tumbling inwards. True may be one of Honing's more technically restrained efforts, but in its soulful, naked power, it's also his most emotionally satisfying to date.