Interstate Buffalo: One Step Away 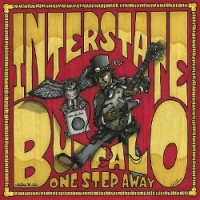 "Little Rock to Memphis be a long stretch of road..." and in the Arkansas summer, that road is oppressive and unforgiving. What does it take to make diamond? Heat and pressure; two things in great abundance on the 276 interstate miles separating Texarkana and Memphis, both physically and figuratively. It is from this environment that the quartet Interstate Buffalo arises. From a regional perspective, this is Southern rock, specifically from Arkansas. In spades. Arkansas the is Deep South's hillbilly stepchild. That is a lot to overcome, and Interstate Buffalo gives it the old I-30 Speedway try.

It is a long shadow that IB steps into with this recording. Sure, the Allman Brothers Band, Widespread Panic, and, by proxy, the Grateful Dead are all here; but so, too, are the Screamin' Cheetah Wheelies, the Georgia Satellites, and My Morning Jacket (bad on the whiskey). This is beautifully ill-behaved music, but never at the expense of the dusty Arkansas prairie Southern rock they make. IB is not campy redneck like the Satellites, but it has the Satellites' Southern bite. The group possesses the organic ingenuity of MMJ without the attendant cosmic noodling. They are Southern Loud and Southern Proud.

But IB's influences are not that simple. The band's net proves thrown wide. Compton's slide guitar on "Down In A Bad Way" chunks like Jimmy Page on "In My Time of Dying," while Poff channels Jim Morrison on "Harp On," circa L.A. Woman (Elektra, 1971). The Doors angle is a potent one, with "Waiting Blues" recalling Morrison Hotel (Elektra, 1970). "Cousin" is the cross between a Van Morrison rave-up and The Allman Brothers' "In Memory of Elizabeth Reed," further crossed with "You Don't Love Me." "St. Peter" recalls 38 Special had that band not become a 1980s sellout.

What Interstate Buffalo represents is an evolution of the Southern music founded in the early 1970s. The band's sound is predicated more on the southern rock movement than the music originally inspiring that movement (blues and southern soul, à la Memphis and Muscle Shoals). That said, all is well. This is goodtime music that follows a script—just not too closely.

Down in a Bad Way; Harp On; Waiting Blues; Cousins; Down to the River; St. Peter; Old Friend; Running After Shadows; Camera; Safety Net; #57.

Title: One Step Away | Year Released: 2012 | Record Label: Self Produced