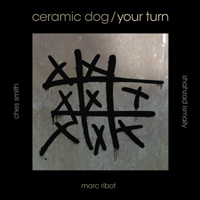 Five years have passed since the release of Party Intellectuals, the 2008 Pi Recordings debut of Ceramic Dog, a power trio led by legendary Downtown guitarist Marc Ribot. Much has changed in the ensuing years, including the recording industry—a subject fervently addressed on Your Turn, the ensemble's eclectic sophomore effort. Railing against capitalism and consumerism with equal vigor, Ceramic Dog blends post-punk rebellion with the sonic liberation of free jazz, finding catharsis in-between genres.

Ribot's role as an in-demand session player for artists ranging from Alison Krauss to Tom Waits has provided the former member of the Lounge Lizards and The Jazz Passengers with the sort of mainstream recognition rarely afforded avant-garde guitarists. Reminiscent of a stripped-down version of Ribot's Knitting Factory-era Rootless Cosmopolitans, Ceramic Dog features the estimable talents of two of the current scene's most enterprising young musicians; bassist Shahzad Ismaily and drummer Ches Smith, whose muscular support inspires stellar contributions from their venerated leader.

Alternating between instrumental workouts and vocal cuts, the album's lo-fi aesthetic lends the date a more consistent sound than its predecessor. Unfortunately, Ribot's everyman singing wears thin on repeated spins, even when his passionate sentiments—such as "we live to entertain you, we ask no compensation ... our labor has no value, content is our name," taken from "Masters of the Internet"—are entirely justified. Bluesy tirades, including the Stooges-quoting "Lies My Body Told Me" and a stirring rendition of the protest song "Bread and Roses," fare far better, though the irreverent nostalgia of "The Kid is Back!" comes off as a frivolous, albeit entertaining diversion.

The session's strongest material eschews vocals entirely. Overdriven surf riffs and tribal drumming fuel scorching numbers like "Ritual Slaughter" and "Special Snowflake," while the anthemic title track demonstrates the group's ability to make an instrumental line sing with the same sort of revolutionary spirit that the lyrical content strives to convey. The epic "Prayer" enumerates the leader's myriad talents; coiled arpeggios, bristling fretwork and bursts of controlled feedback dominate this episodic tour-de-force. But for every killer track, counting the trio's edgy deconstruction of Paul Desmond's classic "Take Five," there are throwaways, like "We Are the Professionals," a juvenile hip-hop parody recalling the Beastie Boys' youthful digressions.

An uneven, but engaging record, Your Turn inadvertently suggests rhetorical connotations. In this age of ephemeral downloading and selective listening, Ribot has offered up a mixed release that begs to be cherry-picked, unintentionally nullifying some of his most salient arguments in the process.

Lies My Body Told Me; Your Turn; Masters of the Internet; Ritual Slaughter; Avanti Populo; Ain't Gonna Let Them Turn Us Round; Bread and Roses; Prayer; Mr. Pants Goes to Hollywood; The Kid is Back!; Take 5; We Are the Professionals; Special Snowflake.