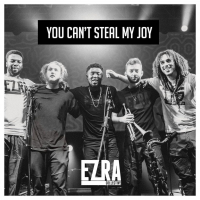 Right out of the gate, Dylan Jones' trumpet delivers a hook so sharp you'll be humming it despite yourself. "Space Is The Place (Reprise)" runs for just over two-and-a-half minutes. It is an all-business introduction that pairs him with a gorgeous hip-hop beat, served up by Femi Koleoso. This is a collective that means business.

From there we go to "Why You Mad?" Joe Armon-Jones' delicate keys along with Koleoso's cymbals set an atmospheric tone. But don't get too comfortable; before long, the band lets loose with a rapidfire blast of free(ish) jazz.

The five-piece's debut EP, Juan Pablo: The Philosopher (Enter the Jungle Records, 2017), was similarly difficult to classify. It is remarkably brave for an act as new as Ezra Collective to present its audience with so many contrasting styles. It is clear these guys have got the chops to share a stage with the world's best hip-hop jazz players.

You get the sense that they can't help themselves. The south London outfit has earned a reputation for wandering out into the crowd in local hotspots like Fabric. It's not difficult to cast them as a group of youngsters so excited by the music that they want to get out there and join the audience.

The twists and turns continue. Track three is a silky-smooth reggae instrumental hilariously entitled "Red Whine." Take that UB40! There is plenty of space here for saxophonist James Mollison to do his thing. And Koleoso's drums are, again, on point. But rather than shoehorn the reggae influence into an Ezra vibe, they've crafted a straight-up killer reggae number.

The album's first single is "Quest for Coin," a track Koeoso says "is about the pursuit of money, but not losing your soulfulness in the process ... You know when you can't afford the train, so you get the bus and meet a beautiful stranger who talks to you about your saxophone case ... Basically city life, London life."

Leaving aside the fact that Koeoso is clearly cooler than you and me, the track is a solid, if somewhat surprising choice for the first single, not because it is lacking in appeal, but because the aforementioned vocal performances by Smith and Carner have the potential for huge appeal.

Smith's "Reason in Disguise" is a picture-perfect R&B track, underpinned by a flawless performance from the band.

Carner's "What Am I To Do?" is London rap at its best. "Lump in my neck; ain't got time for a checkup; I'm fed up; but what am I to do?" The contrast between Carner's gritty take on city life and Ezra Collective's high-polish hip hop vibe is just one more reason this group of young artists is worth our attention.

Space is the Place (Reprise); Why You Mad?; Red Whine; Quest for Coin; Reason in Disguise ft. Jorja Smith; What Am I to Do? ft. Loyle Carner; Chris and Jane; People Saved; Philosopher II; São Paulo; King of the Jungle; You Can’t Steal My Joy; Shakara ft. Kokoroko.