Home » Jazz Articles » Mary Pearson: You And I

Mary Pearson: You And I 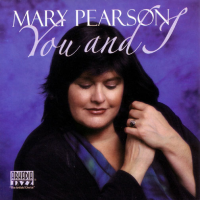 Well, Mary Pearson Mary Pearson has been singing below the national radar screen for 20 years or thereabouts, with the likes of Fred Hersch and recently with Diva No-Man's Band. And you've got to give her credit for ingenuity: When she found the going tough as a nightclub singer, she supplemented her income by booking herself in nursing homes—surely an experience that helped her reach the heartstrings of a broad audience, to say the least.

Coming from numerous other influences of her generation, including folk music, pop singers and Broadway performers, Pearson has synthesized all of that to develop a distinctive style to personalize the music she sings, no matter how often that music may have been heard.

"You And I" then is an album of duos, Pearson the vocalist with several instrumental accompaniments. While you would expect piano accompaniment, it's Steve Davis' work on drums that seems to inspire Pearson, "Lazy Afternoon" and "Thou Swell" allowing Davis to seemingly independently add texture and color behind Pearson's free vocal improvisation, elasticizing a phrase here, snapping and contracting another one there in a way that keeps the listener guessing. Harvie Swartz' introduction on "How Long Has This Been Going On?" recalls his landmark recordings with Sheila Jordan, as does his unpredictable accompaniment.

On the other hand, Lynne Arriale's simplified accompaniment on "My Funny Valentine" goes basic when it should have gone dense and percussive, Pearson then emoting not from a jazzy foundation but as a song stylist.

The clench of Pearson's command and the clarity of her voice arrest the listener all right. So does her fresh approach to ballads when she decides to free her improvisation from conventional approaches. With a long-term contract in hand, it's only a matter of time before Mary Pearson seeps ever so slightly and ever so invitingly into the jazz public's consciousness.