By Friedrich Kunzmann
December 28, 2017
Sign in to view read count 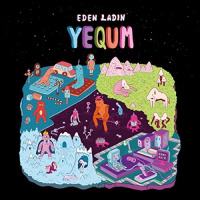 New York based pianist Eden Ladin's debut album Yequm is a remarkable demonstration of maturity and restraint in composition as well as execution. In collaboration with fellow New York neighbours and contemporaries, such as guitarist Gilad Hekselman and singer/guitarist Camila Meza, the Israeli-born sound visionary has recorded an enticing collection of songs, putting on display passionate and melancholic yet catchy melodies in a bed of traditionally instrumented as well as modernly influenced arrangements.

The slow burning opener, "Lonely Arcade Man," can be assigned to the latter. A simple melody introduced by synthesizer and electric guitar is accompanied by sparsely chosen drum hits that are eventually taken over by fluid piano lines. Eden clearly isn't trying to rush things or prove of his virtuoso capabilities, but rather sets the general mood for the journey.

The main melodies on Yequm constantly alternate between guitar, saxophone and piano, once in a while occurring in unison. On "The One Warm Hearted Living In The Kingdom of Ice" Gilad Hekselman and Dayna Stephens lay out the main theme on an arpeggiated piano sound carpet before Stephens departs into a hook-infused melodic solo, highlighted by a catchy organ point. Even though solos are fairly prominent on most pieces, a certain togetherness and cohesion of the entire ensemble essentially shapes the sound presented on this recording. The solos never stray too far from the main thematic material but regularly occur simultaneously as the main melody and function in a supporting role rather than an independent one of self-purpose.

Naturally, with guitar virtuoso Gilad Hekselman on board, some thrusting solo passages are a given as well—point proven, among others, on the bopping "Safta (Grandma)." Proceeded by cheerfully jumping saxophone lines, Hekselman switches to full gear, unshackling for a fulminant, slightly distorted guitar solo, that shortly after finds its way back to an exercise in unison with Stephens.

Eden Ladin skillfully refrains from introducing too much harmonic or melodic material in his compositions, giving his own piano phrasings and patterns the space to unfold and his sidemen their moments to shine as well. Therefore the album establishes an airily open feel, constantly guiding the listener like a breeze. The introduction of Camila Meza's voice on "Dreams" further emphasizes the easiness in flow. Solely accompanied by elegantly broken chords on keyboard, Camila softly breathes the melody, cloaking the listener in the title's meaning exactly.

By using the Phrygian dominant-scale for the main melodic constructions on a healthy slice of the album's songs, Jewish folkloric elements do feel strongly present throughout, lending the tunes in question a melancholic undertone. Yet, the harmonies on the other half of the record aren't based on that material at all, diversifying the palette of sound in an effective manner.

The vast variety of sounds, melodies and different compositional structures presented on Ladin's debut for independent label contagious music is impressive, to say the least—especially when considering the coherent flow that arises. Yequm has something to offer for every type of jazz enthusiast and deserves much attention.