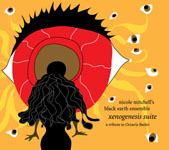 The most important jazz flutist of her generation, Nicole Mitchell reveals another facet of her diverse musical persona on Xenogenesis Suite. Inspired by the work of Hugo award winning Afro-Futurist science fiction author Octavia Butler (1947-2006), Mitchell transposes Butler's words into an abstract sonic travelogue. Breathlessly vivacious and boldly creative, it is Mitchell's most experimental and challenging release to date.

Moved by Dawn (1987), the first book in Butler's Xenogenesis trilogy, Mitchell approached Chamber Music America for a grant to fund a piece in honor of the author, whom she met in 2005. Unfortunately, Butler passed away the day after the proposal was submitted, never hearing Mitchell's sonic interpretation of her writing.

Mitchell draws upon the novel's metaphorical tale as the conceptual foundation for her suite. Ostensibly a story of alien abduction and human-alien interbreeding, Dawn is the tale of Lilith, a human survivor of an apocalyptic nuclear war who is rescued by an alien race (the Oankali) that procreates with other species. Butler's alien abduction parable incorporates rape, racism and slavery into a disturbing tale of survival.

A confident performer with a positive mindset, Mitchell approached Butler's dark and unsettling work as a conceptual challenge. Transposing such material required her to draw upon previously untapped creative potential; in the process, she brings a sense of levity to often harrowing subject matter.

Mitchell channels the emotional turmoil of Butler's writing into a nine-part suite that explores a variety of moods and genres. Invoking the acerbic lyricism of sixties-era New Thing Afro-spirituality and the seminal innovations of the AACM (Association for the Advancement of Creative Music), the album exhibits a wealth of avant-garde traditions. Thorny contrapuntal melodies ("Sequence Shadows"), frenetic free-form interludes ("Before And After"), eerie pointillist soliloquies ("Oankali") and exotic rhythms ("Smell Of Fear") coalesce into a lurid panorama.

As co-president of the AACM, Mitchell embraces her historically rich legacy, employing all manner of extended techniques and devices to invoke Butler's shadowy alien landscapes. Recalling the vanguard work of Sun Ra and the Art Ensemble of Chicago, Mitchell's Black Earth Ensemble revels in their AACM heritage, but it is vocalist Mankwe Ndosi, as the protagonist, that provides the album with soul.