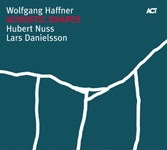 There are those who view the blending of electronica textures and rhythms with jazz is akin to the coming of the Antichrist but, like it or not, it's an increasingly pervasive component of modern jazz. In North America, artists including Wallace Roney, Dave Douglas and Mike Mainieri have been incorporating sampling, turntables and real-time sonic processing with great success. Even more popular in Europe, with artists including Nils Petter Molvaer, Eivind Aarset and Bugge Wesseltoft regularly pushing the envelope, jazz is moving toward exciting new places, and attracting a much-needed younger demographic without sacrificing anything in the way of substance.

Wolfgang Haffner has been stylistically cross-pollinating for two decades, but it was with Shapes (ACT, 2006) that the German drummer threw his hat more decidedly into the electronica ring. An in-demand player with significant international exposure through his work with Klaus Doldinger's Passport, the transatlantic collective Metro, and trombonist Nils Landgren's Funk Unit, it was a planned 2007 Funk Unit tour, when original opening act Ida Sand backed out and Landgren asked the drummer to put together an opening act, that Haffner recognized the potential for reworking the music of Shapes for an entirely different setting. Recruiting pianist Hubert Nuss and bassist Lars Danielson, Haffner rearranged seven of Shapes' twelve originals, and added the high velocity swinger, "Star," to round out the fifty-minute program.

Danielsson was, perhaps, the only choice for the bass chair. His discography ranges from the ambitious NuJazz-meets-orchestra of Mélange Bleu (ACT, 2006) to a more intimate acoustic duo with keyboardist Leszek Mozdzer, Pasodoble (ACT, 2007). For his role as featured soloist in the Wagner Reloaded Project performance at Norway's Punktfest 06, Danielsson—a multi-instrumentalist who also plays piano and cello—has evolved a personal approach to bass that rivals Germany's Eberhard Weber in its unmistakable sound. An unshakable rhythmic anchor throughout, he's an equally impressive pizzicato lead voice on the dramatically impressionistic "Crusin," segueing into the melancholy "Some Other Time," where a lush arco delivers its singable theme before being joined by Nuss.

The single biggest impression, when listening to this live recording, is how easily material originally conceived for a far broader soundscape can be reimagined for an acoustic trio, a testament to the concept that good music is where you find it. As a drummer, Haffner is equally comfortable driving the fiery pulse of "24 Hours," first with brushes during Nuss' dexterous and ideationally brim-filled solo, then switching to sticks for Landgren's sole guest appearance, ratcheting up the heat as it morphs into an energetic piece of funk. Haffner solos rarely, but when he does it can be with unrelenting energy at the end of "24 Hours" or focused construction during the considerably more complex "Shapes."

A broad-scoped drummer with rare multidisciplinary compositional skills, Haffner's name has largely been made by the company he's kept. Now, however, with Shapes and Acoustic Shapes, he's proving himself deserving of attention as a leader, a singular talent well worth watching.