By JOHN KELMAN
January 4, 2011
Sign in to view read count 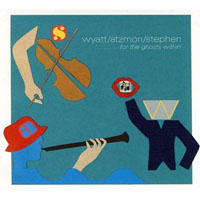 ...for the ghosts within

Since emerging in the mid-1960s—first as part of the nascent Canterbury scene with the psychedelic Wild Flowers and post-Dadaist-turned-free jazz-rockers Soft Machine; but then, after a tragic accident that left him paralyzed from the waist down, an increasingly astute and distinctive singer/songwriter—Robert Wyatt has managed a truly rare thing: to build a career that has reached near-legendary status, despite still feeling somehow underground and cult. Wyatt releases albums relatively infrequently, but when he does—as with the remarkable Comicopera (Domino, 2007)—they always create a surprisingly large wave of interest, across a broad swath of fans with diverse musical interests. Advance buzz about ...for the ghosts within was even greater than usual, and why not? This time, Wyatt was sharing the leader's bill with multi-instrumentalist Gilad Atzmon, the UK-based Israeli expat who played on Comicopera, and violinist/violist Ros Stephen, a member of the Sigamos String Quartet.

Advance hype can often lead to impossible-to-meet expectations, but ...for the ghosts within defies the norm; an album so powerful in its sublime beauty, so perfectly constructed in its choice of material and instrumentation, and so paradoxically spare yet deep, that it stands amongst the best recordings of Wyatt's long career—and that's saying something.

...for the ghosts within isn't the first album on which Wyatt has dug into non-original repertoires, but it's the first to focus almost exclusively on other folks' writing. Only two tracks are co-written by the singer/songwriter, including the quirkily lyrical "Maryan," written with Belgian guitarist Philip Catherine and first heard on Shleep (Domino, 1997), but re-imagined here for Atzmon on clarinet, and double-bassist Richard Pryce and the Sigamos String Quartet, which—led by Stephen, who arranges all but two of the nine tracks featuring the chamber ensemble—lends a lush but never syrupy backdrop to most of ...for the ghosts within' eleven tracks.

It only lasts a brief 3:11, but "Where Are They Now?," co-written by Wyatt, Atzmon, vocalist Abboud Hashem and Shadia Mansour ("The first lady of Arabic hip-hop") is, in many ways, the album's spiritual and thematic centerpiece. With a broad-reaching musical backdrop ranging from the retro-swing of Atzmon's layered clarinets and saxophones to the beat-driven raps at its core, both Wyatt and Atzmon have been outspoken about its Palestinian subject matter. Regardless of personal politics, it's hard not to be moved by the group's passionate delivery here and on "The Ghosts Within," a longer piece by Atzmon that, in its plaintive subject matter (words written by Wyatt's wife, Alfreda Benge and sung by Atzmon's spouse, Tali) and mournful lyricism—with Atzmon a multi-instrumental tour-de-force on saxophone, bass clarinet, accordion and Palestinian shepherd's flute—makes a compelling case for music as social conscience.

Wyatt doesn't sing on "The Ghosts Within," but his distinctively working class British accent, subtle lisp and a soft voice that occasionally rasps and breaks to great emotional effect, define a series of jazz standards, beautifully arranged for strings but completely avoiding any sense of saccharine, including the Raksin/Mercer chestnut, "Laura," Duke Ellington's "In a Sentimental Mood," and the classic "What a Wonderful World," made famous by Louis Armstrong. Wyatt's whistling on an indigo reading of Thelonious Monk's enduring "Round Midnight" is remarkably articulate, matched by Atzmon's smoky alto saxophone, while the singer's trumpet work on Billy Strayhorn's "Lush Life" is a reminder of his similarly scopious musical reach.

...for the ghosts within's emphasis on strings, reeds and soft brushwork from Wyatt makes it a largely acoustic effort, but subtle programming works soft wonders on tracks like "Lullaby for Irena," where an electronic intro sets a droning pedal tone for Atzmon's haunting, microtonal-inflected clarinet, leading to Wyatt's subdued delivery of Stephan and Benge's ethereal love song.

But ...for the ghosts within's most moving track is a rework of Bernie Edwards/Nile Rogers' "At Last I Am Free," originally performed by disco-funksters Chic but covered by Wyatt, for the first time, on Nothing Can Stop Us (Domino, 1982). Wyatt's original was defined by synthesizers, double-bass and simple percussion, but here it becomes an emotional climax to the disc despite its relative brevity. Atzmon's concise, six-bar bass clarinet solo speaks volumes, with Stephen's understated string arrangement dovetailing seamlessly with Julian Rowlands' bandoneon, Atzmon's layered reeds, and Wyatt's voice—which echoes, at first, across the audioscape with gentle authority.

At a time when all-too-often-covered songs are being trodden into the ground through excess melisma and look-at-me pyrotechnics, Atzmon is an unfailingly talented musician who is clearly capable of greater virtuosity, but demonstrates it here through his ever-perfect choices, where what not to play is as important as what is. Stephen's equally spot-on string work and arrangements bring an overarching complexion to the record that's as complex as the depth of human emotion, yet as clear and concise as the relatively simple messages underlying the disc. And Wyatt—always a nuanced singer who favors an implicit, less-is-more delivery—demonstrates that he's equally capable outside the relative comfort zone of his own material. With ...for the ghosts within, Wyatt proves himself a layered interpreter who, in this collaboration with Atzmon and Stephen, has produced a career-defining album that, too late for 2010's Best Of list, is already a strong contender for 2011.


Tracks: Laura; Lullaby For Irena; The Ghosts Within; Where Are They Now?; Maryan; Round Midnight; Lush Life; What's New?; In a Sentimental Mood; At Last I Am Free; What A Wonderful World.