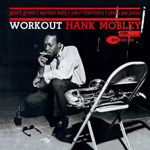 Miles Davis dissed him, Leonard Feather called him the middleweight champion, and most people thought that John Coltrane outshone him. Because of these and a few other real or imagined slings and arrows, a kind of victim support group vibe has gathered around Hank Mobley in recent years. He's in danger of going down in history as a tragic figure.

But hey! Here's another perspective to consider. Mobley recorded an astonishing 25 albums as a leader or co-leader for Blue Note (not even Grant Green comes close), was featured on around another 35 Blue Notes as a sideman, and made his mark on Columbia and a few other labels too. Where's the victim?

Mobley had some good times outside the studio as well. He was married twice, by all accounts on both occasions to stunningly beautiful women, and lived until he was 56—not a massive span, true, but for a black hard bop saxophonist born in 1930 who had intermittent heroin problems, longer than many. Mobley did alright, as history should record.

Fact is, Mobley wasn't one of the all-time greats. His style was an amalgam of others before and around him, and his technique was no better than average. His tone was thin more often than it was fat, and he squeaked on fast passages or when negotiating tricky intervals. He was, though, an exhilaratingly ragged and abandoned tenor saxophonist and a solid blues-based composer who made one all-time great album, Soul Station, and half a dozen very good ones.

Workout, from 1961, is one of the very good ones, and it's now being released with a lethal Rudy Van Gelder remaster. The headlong charges which are "Workout" (pure bop) and "Smokin'" (pure hard bop) showcase Mobley at his best: passionate, wild and 100% in the moment. "Workout" is further distinguished by Philly Joe Jones' door-rattling presence and Grant Green's straight out of Minton's, more Christian than Christian, jetstream of a solo. "Uh Huh" (brisk soul-jazz, in which Mobley acknowledges and recalibrates his R&B roots) and "Greasin' Easy" (moderato hard bop blues) are almost as good. Mobley wrote all four of these tracks. (The two standards, "The Best Things In Life Are Free" and "Three Coins In A Fountain," are by comparison merely pleasant).

So thanks, Hank, and I hope you're still having a good time, wherever you are.