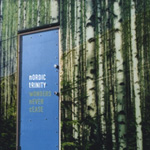 The Nordic Trinity comprises three generations of Finnish musicians, which must say something about the perspective of guitarist Mikko Iivanainen, who founded the group. He is the youngest of the three, having been born in 1975. The other two, Juhani Aaltonen (tenor saxophone; born in 1935) and Klaus Suonsaari (drums; born in 1959) have established themselves in the twin worlds of jazz and improvised music. Suonsaari has long been in the US, while Aaltonen is heralded as the founding father of the Finnish saxophone sound.

The music of this Trinity has a wide sweep. The musicians let invention guide their path as they build around a jazz core with chamber music, rock and whatever captures their imagination at the moment. For them "Passion is a warm embrace. Aaltonen opens with a gorgeous fluid tonality before moving into a deeper pith, keeping the flame glowing to the end. The form is looser on "Autumn Dance, where Aaltonen lets the notes tumble out of his saxophone, his restlessness met with the rock stance of Iivanainen's guitar, reveling in feedback.

"Snarling Dogs lives up to the image it creates—and once again, Iivanainen's riffs testify to their penchant for delving into hard rock territory. Aaltonen brings in the jazz harmonies and Suonsaari, as he does on the other tracks, imparts thrust and impetus to the movement.

As enjoyable as its excursions into this territory are, the Nordic Trinity shows a greater presence on the slower tunes. It is here that the musicians pack an emotional wallop: all three find that cord which makes the heart beat more happily. This resolution is seen at its best on the attractive structure of "All My Yesterdays," where the melody opens on the saxophone with calm deliberation and then spreads with an articulate demeanour.