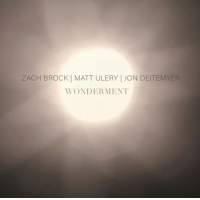 Having played together in Chicago's burgeoning jazz atmosphere since 2005, Wonderment is the trio's debut and one to remember beyond the inevitable best-of-2019 lists. Brock's dervish swooping swirls and lengthy high wails may be the lead instrument but Wonderment is hands-down a brilliantly collective endeavour, with each player's versatile and visceral enthusiasm holding forth and backing off when the flow of the music demands it. Jazz meets rock meets gypsy and whimsy, each track powered by an effervescence and ebullience found all too rarely when outstanding talents convene.

The title track breaks from gate and from there the train picks up speed. Written by Brock, the track reveals the elegance and pathos that has made him the leading light on his instrument. They vamp and pull, with Ulery's arco bass echoing Brock, then a return to the head with Deitmeyer picking up the pulse behind them. It's a snapshot of the instrumental agility that the trio revels in throughout.

Ulery's plucky "Levelled" evolves into a vital three-way interplay with Deitmeyer's rock fomented jabs pushing the stringmen forward. With unrestrained post-millennial glee, the spin-cycle whirl of "Wokey-Dokey," the jammy solo-sequenced "Cry Face," and the brooding "Yge Beive" just serve to acknowledge how inspired they were to get the music out and to move on to to new bolder horizons.