By Dan McClenaghan
March 18, 2012
Sign in to view read count 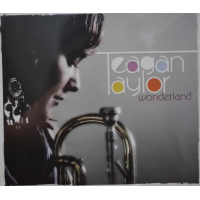 Vocalist/trumpeter/cornetist Teagan Taylor displayed a definite influence of vocalist Norah Jones on her debut, I Can't Explain (Jazzomaniac Records, 2010). As a Blue Note Records artist who leans heavily toward popular music with forays into the jazz realm, Jones is an engaging and popular singer/pianist and a very good role model for the young Taylor, who was 19-years old at the time of her debut. Taylor's potential for wider recognition and success in a competitive field seems huge with the release of her second recording, Wonderland.

Where I Can't Complain contained a heavy dose of jazz and Great American Songbook standards—"Taking a Chance on Love," "Bye Bye Blackbird," George Gershwin's "But Not for Me" and "Summertime"—her sophomore CD represents a stepping out for Taylor and a leap in the direction of forming her own vision and voice. Taylor co-wrote eight of set's tunes with her father Tim Taylor, who doubles as the trio's guitarist. They open with their "Fight or Flight," a snappy, jazz- inflected romp featuring some New Orleans-like trumpet/clarinet interweaving and call and response between Taylor and her twin brother—and the trio's bassist—Dylan Taylor.

Augmented by drummer Bob Sheehan, the trio mixes up the styles nicely. "Crooked Girl," penned by David Beldock, is a young woman's dark rumination on pitfalls of straying from the good girl expectations, with the mood of Leslie Gore's 1964 hit, "You Don't Own Me." In addition to her heartfelt vocal, Taylor proves here—and on every trumpet or cornet turn she takes—to be an expressive and no-notes-wasted player with a beautiful tone and laconic and relaxed delivery.

The title tune is upbeat and ebullient, with Taylor displaying some of the vocal sass of a young Anita O'Day. "Aftertaste" opens with rock and roll attitude that segues into a hip-hop groove riding on Tim Taylor's crackling guitar. "To the Moon and Back" rolls with an easy island vibe and includes another wonderful trumpet solo. "Who Am I to Love" sounds like a song from one of those late 1950s or early 1960s girl groups— with, in this case, a modernized Sun Records production—that could have rocketed up the radio charts back in the day.

A special note must be made regarding another Taylor and Taylor original, "God of Small Things." With just Dave Blackburn's shimmer guitar and Teagan Taylor's lovely voice harmonizing with guest vocalist Peggy Watson, the prettiest of melodies is laid down. It is a simple, gorgeous tune in the mood of something Paul McCartney might have written when feeling reflective, as he was on "I Will" from The Beatles (Capitol Records, 1968). Taylor's tune is timeless, leading into a return to jazz roots with a couple of standards to close the set: "These Foolish Things" and "Cheek to Cheek."

Teagan Taylor's Wonderland announces the arrival of a new star on the rise.

Fight or Flight; Crooked Girl; Aftertaste; To the Moon and Back; Wonderland; The Fallout; Love Me Today; Just Another Day; God of Small Things; Who Am I to Love; These Foolish Things; Cheek to Cheek.