Wayne Shorter Quartet: Without a Net

By John Eyles
February 7, 2013
Sign in to view read count 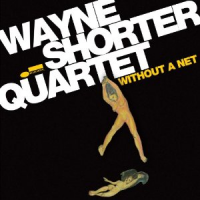 It is now well over a decade since legendary saxophonist Wayne Shorter formed this quartet with Danilo Pérez, John Patitucci and Brian Blade to tour and record Footprints Live! (Verve, 2001), an album which signaled the end of a period in the doldrums for Shorter and a cracking return to form. The energy and verve of the quartet's three younger players brought out the best of Shorter, a reminder why he deserved that "legendary" tag.

A 2003 studio-recorded follow-up, Alegria (Verve), hedged its bets by mixing and matching the quartet with guest stars. In the years since, the quartet has not released another album to match Footprints Live!—until now. Without a Net was mainly recorded on the quartet's European tour in late 2011 and captures it in full flow in front of enthusiastic audiences. Most remarkably, after 43 years away from Blue Note, Without a Net marks Shorter's return to the label for which he recorded the extraordinary series of albums including Speak No Evil (1965) and Adam's Apple (1966).

Despite his impressive history, Shorter is reluctant to trade on past glories. Of the nine tracks here, six are new Shorter compositions, with the other three being stunning versions of "Orbits" which opened trumpeter Miles Davis' Miles Smiles (Columbia, 1966) and "Plaza Real," from Weather Report's Procession (Columbia, 1983), plus a cover of "Flying Down to Rio," the title song from the 1933 Fred Astaire/Ginger Rogers film; the latter reinvents the piece as a prolonged solo feature for all four quartet members, especially Shorter and Pérez. Importantly, this is a real foursome, with all members vital to its success, not just a star soloist plus rhythm section. The quartet demonstrates the benefits of their years together, its crispness and tightness sounding natural and effortless.

The only track not recorded on that European tour is the album's longest, the 23- minute "Pegasus," recorded at the Walt Disney Concert Hall in Los Angeles, on which the quartet is joined by the New York-based Imani Winds quintet. The composition is a melodic tone poem which uses the quintet's woodwinds effectively to showcase the quartet, particularly Shorter's soaring sax lines and Perez's fine piano work. It is a stunning achievement but not quite the highlight of the album; that accolade would have to go to the shortest track, "Myrrh," because of its barnstorming Shorter solo which would steal many an album. Like the rest of Without a Net, it demonstrates that, as he approaches his eightieth birthday, Shorter is in terrific form and still full of fire—just like the rest of this excellent quartet. More soon, please..