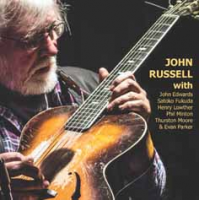 This album is a faithful record of John Russell's sixtieth birthday concert which took place at Cafe Oto, London, on Friday 19th December 2014. Everything is included here except for announcements, applause and less than half a minute of music which were all edited out to fit it onto one CD; at a few seconds short of seventy-eight minutes, it just manages that. Thanks to the sterling efforts of Helen Petts, the entire concert was filmed and can be viewed on YouTube—well worth checking out as the footage includes everything, even the presentation of the birthday cake, the blowing out of the candles and Russell's closing speech.

On the night in question, it was a huge relief and delight to friends and admirers of Russell that the concert took place with him present. Having been diagnosed, earlier in the year, with three blocked arteries and with only a third of his heart working, at the time he was awaiting a quadruple bypass operation and so had been off the scene for some months. On the evening in question, the love and affection for Russell was tangible and all-pervasive in Cafe Oto, contributing to the gig's positive, feel-good atmosphere which doubtless had its effect on the musicians, as heard in the resultant music. As the track titles indicate, the album's four tracks correspond to the evening's four sets, two trios and two duos, one of each before and after the interval, all of them featuring Russell in top form; from his playing that evening, no-one would have had any inkling of Russell's condition.

Not only is Russell a vital member of London's improv community as a player but, since 1991, he has also been the driving force behind the monthly Mopomoso and its associated annual three-day improv festival, Fête Quaqua, making this the UK's (possibly the world's?) longest running concert series dedicated to free improvisation. Over the years, these institutions have been responsible for bringing together and developing many improvisers from across the world. The album opens with an example of this, the trio of Russell with veteran trumpeter Henry Lowther and the much younger, Japanese-born, classically-trained violinist Satoko Fukuda, both long-standing regulars at Mopomoso. Originally, Lowther and Fukuda were in separate duos with Russell, until the guitarist thought they would all sound good together and this trio was born. The music here is testimony to the wisdom of that insight; Lowther and Fukuda are highly distinctive soloists but their sounds and styles also complement each other well and, as so often, Russell plays a key role in holding everything together and making it flow. Altogether, the three sound like they were made for each other.

Next up is another combination that has featured frequently at Mopomoso, the duo of Russell with vocalist extraordinaire Phil Minton. There are countless examples that demonstrate Russell is a first rate duo player—collaborations with Pascal Marzan and Ståle Liavik Solberg spring to mind—and this pairing is further evidence. The guitarist is particularly adept at simultaneously occupying the roles of accompanist and soloist, always striking just the right balance between the two so that his contributions attract attention without distracting from his playing partners—a neat trick. As ever, Minton is a phenomenon, a law unto himself.

After the interval, the concert featured another trio and duo, both with musicians whose names alone are recommendation enough. First up was the trio of Evan Parker, John Edwards and Russell which dates back to at least December 1996, when they recorded the album London Air Lift (FMP, 1997) with Mark Sanders on drums. With so many years of regular collaboration under their belts, it was no surprise that the saxophonist, bassist and guitarist gave an exemplary performance, playing, reacting and thinking as one for over twenty-five minutes. Textbook stuff.

Following that trio, the concert ended with a duo which surprised many audience members on the night and may also cause some listeners to do a double-take. It pairs Russell with a guitarist who is now a local resident and is becoming a familiar face at Cafe Oto—Sonic Youth's Thurston Moore. The two had previously played together at Cafe Oto back to November 2013 (as seen in the YouTube clip below). However, this set was fiercer than those relatively polite exchanges, not least because Russell eschewed his customary acoustic guitar in favour of an electric guitar plus pedals. With Russell on the left channel and Moore on the right, the two traded phrases and ideas, their contributions remaining clearly distinguishable from one another, yet becoming intertwined in a very satisfactory exchange that does them both credit. (This set alone should finally lay to rest the "no sex, please, we're playing free" nonsense that appeared in a review in "a well-known music monthly" back in 2010, criticising Russell and other improv guitarists in comparison to rockers. No doubt about it, Russell's mojo works just fine...) After their set, Moore presented the aforementioned cake and led the singing of "Happy Birthday...."

Happily, some three months after this concert, in mid-March 2015, Russell had a successful bypass operation and, after convalescence, is now back playing regularly as well as running Mopomoso monthly. Long may he continue to do so.