Tom Graf: Wish You Were Here 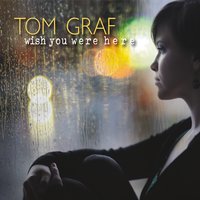 Wish You Were Here is the latest full-length from songwriter/composer Tom Graf. Graf is an industry vet -he co-wrote Merry Clayton's "Yes" from the Dirty Dancing soundtrack in 1987 -and he has been known to create head—turning music. He is an accomplished talent who considers jazz as one of his first loves. On Wish You Were Here, Graf weaves together his lyrical skills with various stellar vocalists.

"No One Loves You More," featuring Marc Russo and Kimiko Joy, boasts infectious grooves music and charismatic singing. The song is a profession of love that is somewhat dependent and possessive. Although the track is a bit emotional, it sends out a strong message of unconditional love, a love that would want you to be always there, but will never get in your way if you decide to go and leave.

"Goodbye," featuring Erik Jekabson and Joy, is actually reminiscent of Boyz II Men's "4 Seasons of Loneliness" because of similar elements used in the music. It is dreamy, easy to listen to, and more on the side of blues. It discusses the struggles of one-sided love, its joy, sorrow, and beauty. The performances are quite captivating.

The title cut is reflective and dramatic with a weighty melody that perfectly captures a person's need to be with someone that he/she loves. It's the perfect album ender.

Each track is full of catchy lyrics and mesmerizing hooks. One can initially think that this album is just sad and blue, but digging deeper, there is actually a message of hope and love engraved in every track. This CD has a strong identity that will definitely be engraved into the hearts of its listeners.

No One Loves You More; Sittin' and Talkin'; Deluxe Waterbed Blues; Bella Bossa; Goodbye; Coffee and Donuts II; Wish You Were Here.