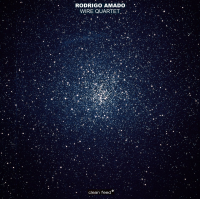 The debut album of Portuguese saxophonist Rodrigo Amado's Wire Quartet—featuring the rhythm section of the acclaimed RED Trio, double bassist Hernâni Faustino and drummer Gabriel Ferrandini (who also plays in Amado's long-standing working Motion Trio) and experimental guitarist Manuel Mota—demonstrate Amado strongest and most intense performances to date, defying any attempt to associate it with post-bop or free jazz. This powerful quartet also establishes Amado's wise choice when it comes to radical and original sounding guitarists, after collaborating with Luis Lopez in the Portuguese-American Humanization Quartet.

The titles of the three extended pieces frame the spirit of the music's total commitment to the improvised art. But it is the interaction between the warm sounding, charismatic and often soulful blows of Amado and the exploratory, feedback and distortion-laden guitar lines of Mota, sometimes spiced with rough, bluesy feeling, that defines the explosive sonic terrains of these improvisations. The unique finger-picking approach of Mota and his impressive and focused command of textural, noisy sounds inject subversive elements of post-rock to the improvisations, bringing this quartet close to the sonic territories of Sonic Youth, its guitarist Thurston Moore's bands or The Ex, in its most abstract and wild improvisations. Faustino and Ferrandini hold the muscular and restless interplay with exemplary force of their own.

Amidst the energetic interplay of "Abandon Yourself" there are few moments when the quartet slows down to explore introspective, spare textures without giving up the intensity and the inherent tension that characterizes its performances. The shorter "Surrender" adopts a slower pace that feature the colliding strategies of Amado and Mota and the versatile, propulsive power of the rhythm section with all its nuances. "To The Music" lifts off patiently, allowing Amado to emphasize his lyrical tone that contrasts Mota fragmented lines, but it soon gains power and volition and aims with full force towards its climactic eruption.

Abandon Yourself; Surrender; To The Music.