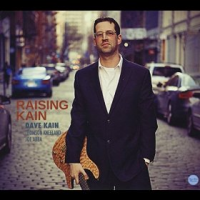 Raising Kain is a first for guitarist Dave Kain in two ways: it's the first trio record in his discography and it marks the first time he's worked with a producer instead of going it alone.

After releasing a few albums with different incarnations of the Dave Kain Group, he decided to trim things down. Kain started writing specifically for trio, focusing in on this format as the gigging commenced. Once he felt like all the pieces fell into place, Kain took to the studio and, with some help from long time bandstand pal-cum-producer Matt Garrison and Andrew Swift, he captured the intricacies of his music for all to hear.

Kain is a clean-toned player with a penchant for semi-angular melodicism and a preference for dialed-down intensity. He's not the type to favor histrionics and electronics. He is willing to shred and dirty up his sound on occasion ("Logic"), but that's the exception, not the norm. The majority of this music finds him in a more controlled sonic space. His trio mates—bassist Thomson Kneeland and drummer Joe Abba—are equally sensitive players, both in support roles and as soloists. Kain is generous in sharing space, as Kneeland gets plenty of opportunities to take center stage as soloist, scene-setter ("Chloe"), or near-equal partner-in-play ("Paco"). Abba keeps things interesting with a steady flow of ideas. He's comfortable and confident in any setting, be it a lightly waltzing scenario ("Lie And Deny"), a bop-derived run with space for traded solos ("On The Scene"), an odd-metered outing ("Hall Pass"), or a gentle journey ("Chloe").

Raising Kain isn't a hit-you-over-the-head kind of record, but it does get inside the head. Dave Kain's trio doesn't necessarily raise Cain, yet it's impactful in its own way.

Eleven; Miley Cyrus Is The Devil; On The Scene; Lie And Deny; On My Way Home; Hall Pass; Logic; Paco; Chloe; Opportunity; Some Other Time.