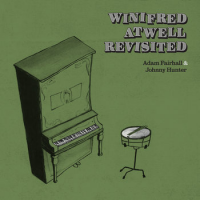 Winifred Atwell was a gifted pianist, born in Trinidad, who came to Britain to study classical music at the Royal Academy of Music in 1946. By the early 1950s, a combination of talent and a husband who knew his way around British popular entertainment had established Atwell as a bill-topping theatrical and recording star.

Atwell's happy-go-lucky "honky tonk" style was a combination of American boogie woogie, which she had picked up from US servicemen in Trinidad, and British pub-sing-a-long pianism; goodtime music that brought a smile to the grim daily grind of post-war austerity Britain.

The uncomfortable wider social context was that many of Atwell's English fans would have been horrified if someone looking like her moved into the house next door to them. Atwell knew this, but if it hurt her, she never showed the wound in public. And, as the saying goes, she would in any case have been crying all the way to the bank. Until the arrival of the Beatles changed everything, Atwell continued to have top ten hits. In the 1970s she moved to Australia, her fame exempting her from the country's whites-only immigration policy. She became a campaigner against racism and the ill-treatment of the country's Aboriginal population.

On Winifred Atwell Revisited, pianist Adam Fairhall and drummer Johnny Hunter pay homage to Atwell's guileless, joyful music while also giving it an avant-garde tweak or two. Fairhall is well-known in this parish as the pianist in tenor saxophonist Nat Birchall's highly regarded spiritual-jazz quartet, and among his other projects is an experimentalist one with Hunter. Hence the tweaks. The two players push, pull and nudge Atwell's oeuvre just enough to give it a twist but not so much as to remove its smile-inducing joie de vivre. Good stuff.

Black And White Rag; Roll Out The Barrel (Beer Barrel Polka); If You Knew Susie; Taboo; Boogie For Atwell; My Old Man (Said Follow The Van).