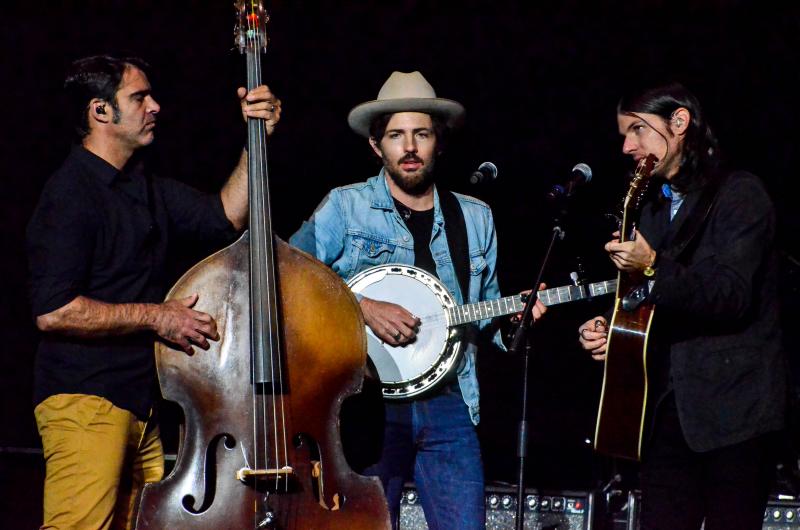 The sun blazed overhead on the Saturday afternoon in September as Willie Nelson and Blackbird Presents Outlaw Music Festival Tour landed at Northwell Health at Jones Beach Theater on Long Island, NY. With an early 4 PM start to accommodate a wealth of talent, the parking lot already contained a hearty number of cars and tailgating fans ready to enjoy the music.

Presented by Southern Comfort and Sirius XM, this festival has hit its stride in the second year, starting out in early July in Dallas and touching down in 10 cities before finishing up in New Jersey in mid-September. While a core number of artists are along for the entire stretch, there are slight variations to the lineup at each stop. The amphitheater at Jones Beach, an iconic summer staple for popular tours to frequent, had the fortunate lineup of Willie Nelson, Sheryl Crow, The Avett Brothers, Margo Price, Lukas Nelson & Promise of the Real and Particle Kid. This eclectic mix of artists added up to an amalgam of Americana music, new as well as traditional, in perfect harmony.

Particle Kid was first to appear on the stage, enrobed in a black jumpsuit with multi-colored sunglasses in the harsh sunlight, playing near an orange octopus that lounged on the stage near the microphone. Also known as Micah Nelson, Willie Nelson's youngest son, Particle Kid is a gifted musician and artist. Starting out with just a guitar and adding band members along the way, he began his 25 minute set with the mellow "The Ocean" before launching into the catchy and upbeat "Everything is Bullshit." Particle Kid and his future-folk project captured the attention of those lucky enough to have entered the venue early. "How lucky are we?" he asked the crowd, waving an arm to the sky. "What a great day!" His set ended too soon with the song "Dreamer" which aptly showcased his chops on the guitar.

Next up was Lukas Nelson and the Promise of the Real. Only two years separate the brothers Nelson. They have collaborated in the past in Promise of the Real. Currently based out of California, Lukas and POTR backed up Neil Young on his thirty sixth studio album The Monsanto Years (Reprise, 2015) and the tour that followed. With four albums and an EP under his POTR belt, Lukas commands an easy comfort on the stage that would normally be found in musicians much older. Clad in a white button down shirt and glasses, his hair pulled back in a low ponytail, Lukas' musical DNA is undeniable. With eyes closed, Lukas seemed lost in the music, on performances that included "Ain't Gonna Die Alone," "Four Letter Word," "(Forget About) Georgia" and "Find Yourself." During his set, Margo Price was seen in the orchestra, watching for a portion of a song before her own set began.

With very short intermissions to break down the equipment, Price soon took the stage for her set. The 34 year old from Illinois who now calls Nashville her home, has recently garnered much attention, including appearing as the musical guest on Saturday Night Live last year. 2016 was a big year for Price, as she released two CDs on the Third Man Records label: Midwest Farmer's Daughter" (2016) which was a studio project as well as her live CDLive at Rough Trade East (2016). Buzz about All American Made (Third Man Records, 2017) has already started, with fans eagerly awaiting the release in October. Wearing a long dress that blew in the breeze off the water and large orange-tinted sunglasses, Price represented even younger than her chronological age. Her capable vocals carried her effortlessly through "Tennessee Song," "Desperate + Depressed," "Weekender" and "Hurtin'(On the Bottle)" and her hands flew over the guitar strings. New fans were made that afternoon.

The ever-popular Sheryl Crow bound on the stage next, clad in black denim skinny jeans, matching denim jacket, gray t-shirt and black and white checked sneakers. With boundless energy, the 55 year old who easily looks a decade younger, fluidly moved among the instruments, from guitar to bass to keyboards. The nine-time Grammy Award winner played a perfect mix of new and old material, much to the delight of the crowd, who were enjoying both the music and the last bit of sunset before twilight hit. "Can't Cry Anymore," "Everyday is A Winding Road," "My Favorite Mistake," "Strong Enough," and "If It Makes You Happy" turned into sing-alongs with the audience providing impromptu backup on their favorite numbers. In the true feeling of festival collaboration, Lukas Nelson joined her onstage for "Midnight Rider," a tribute to Gregg Allman.

The Avett Brothers commanded the stage next. One of the most powerful sets of the day, it all started with three members on stage closely surrounding a mic and facing the audience: Scott Avett, Seth Avett and Bob Crawford, lit by an overhead spotlight. The almost sacred calm of the first songs morphed into a full on party, resplendent with fantastic lights and the complete touring band in attendance. Hailing from Mount Pleasant, North Carolina, The Avett Brothers have been nominated for three Academy Awards as well as taken home four Americana Music Honors and Awards. Seeing them live, someone new to the band could easily see how they've earned so much critical praise and popular success. A raucous version of "Satan Pulls the Strings" with the stage bathed in red light had the audience on their feet. With Scott Avett on vocals, banjo and kick drum, Seth Avett on vocals, guitar and high hat, Crawford on vocals and stand-up bass, Mike Marsh on drums, Joe Kwon on cello and Tania Elizabeth on violin, the rich, textured notes of these songs were lush. A powerful cover of Bob Dylan's "I Shall Be Released" was perfected by Elizabeth's sweet vocals. Other standouts include "Ain't No Man," "I And Love and You," "Murder in the City," "Head Full of Doubt/ Road Full of Promise," "True Sadness" and the cathartic "No Hard Feelings." An organic feeling of joy emanates from The Avett Brothers when they perform and the feeling pervades even a large scale, outdoor amphitheater.

After a short set reconstruction, the lights in the theater dimmed so Willie Nelson and company could make their way in the darkness from the tour busses in the area adjacent to the orchestra and the stage. Audience members seated on that side of the arena leaned far over from the mezzanine railing to catch a glimpse the icon, who appeared on the stage moments later, bathed in light and clad in a hoodie against the cold evening temperatures and wind off the water. With his trademark braids under a cowboy hat, the 84 year old was in fine spirits and the audience reveled in his presence. With both Lukas and Micah joining him on stage, as well as his sister Bobbie Lee at the piano, his recording and touring band is aptly named The Family. Hailing from Abbott, Texas, Nelson soon donned his signature bandana, replacing his cowboy hat and taking off the hoodie. "Whiskey River," "Good Hearted Woman" and "Georgia on My Mind" were eagerly anticipated and the crowd showed their appreciation. "Texas Flood" and "Still is Still Moving to Me" impressed as well as "Mamas, Don't Let Your Babies Grow Up to Be Cowboys." Nearly as well recognized as Nelson himself is his guitar Trigger, which proudly displays over 100 signatures of Nelson's friends, from musicians to lawyers and more. The wear on Trigger is evident as a hole has worn through on its body from constant use but the weathered and treasured instrument still beautifully emits Nelson's distinctive hybrid of Americana, mixing jazz, rock, folk and blues. Nelson smiled as he played "It's All Going to Pot" as well as "Roll Me Up and Smoke Me When I Die." Joined back on stage for a jamboree including Crow, Price, members of the Avett Brothers and his sons, it was truly a treat for the audience, and by the expressions on the musicians faces, they felt the same about this joyous celebration.

A truly magical touring festival curated by a legend like Nelson contains so many thrilling moments. As fans departed the stadium, enriched by the experience and talking about favorite moments, the anticipation of next year is a souvenir carried by many who attended.