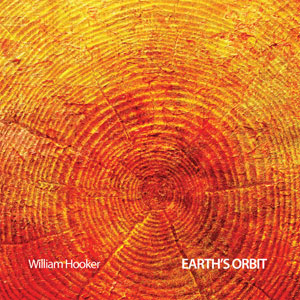 If East Coast is hot and West Coast cool in classic jazz parlance, then composer and drummer William Hooker subverts that tenet with East hot, West hotter in this limited edition, double vinyl set featuring separate bands captured live on each coast. Hooker has a fascination for incorporating other art forms into his performance, be it his own poetry or films, often transcending his free jazz roots to encompass rock and noise sensibilities in the process. But on these sides he focuses firmly on the core business, albeit with some nods to noise, for one of his strongest releases in recent years.

Hooker delineates his associates into Bliss (East) and Bliss (West), with the former a trio and the latter a quartet. Both are given full latitude to interpret the drummer's thematic material in almost unbroken consort, and each makes the most of the opportunity for some spirited blowing. Hooker has chosen his colleagues well. Completing the trio, alto saxophonist Darius Jones is one of the rising stars of the downtown scene, following his celebrated debut Man'ish Boy (Aum Fidelity, 2009), while bassist Adam Lane has a string of compelling releases to his name, having studied and worked with reed players Anthony Braxton and John Tchicai and trumpeter Wadada Leo Smith. Though the quartet may not be as illustrious it makes up for it in power, sporting another Smith alumni in tenor saxophonist Aaron Bennett, along with renowned, highly combustible punk jazz drummer, but here guitarist, Weasel Walter, and Texas bound former Bay Area bassist Damon Smith.

Hooker leads from the front on both discs, molding and shaping the flow with his finely honed, almost orchestral sense of sound placement, density and dynamics imparting form and purpose to even the freest moments. Hooker's compositional frameworks are slight, acting as signposts rather than routemaps, signaling direction but not the precise means to reach the destination. As a consequence frequent daredevil diversions are unpredictable and rewarding.

Bliss (East), recorded at The Stone in 2007 gets underway with Hooker's repeated drum cadences and tumbling bass figures presaging a slow burning saxophone exposition from Jones, pregnant with promise, but oozing menace. Jones shows his mettle as an improviser, constructing from scant foundation a towering edifice of a solo on the first side, repeating phrases to ramp up the tension before culminating in a querulous tirade of anguished rasping shrieks. Throughout he is ably abetted by Lane's nimble basswork, so deep-toned it is almost subliminal, effecting both commentary and spur simultaneously. Only three pieces are tracked though five are listed, reflecting the smooth transitions as Hooker moves the trio through a variety of moods, new drum motifs cueing switches from free-form to free-bop, via rubato soulsearching. Jones navigates these reaches wonderfully, careening between riff and raucous, in a paradoxically measured yet impassioned display, always conscious of the longer form Hooker demarcates.

With Bliss (West), recorded at San Francisco's Hemlock Tavern in 2009, Hooker once again marshals his resources from behind his kit, drawing raw and powerful performances from his sidemen, with vocal exhortations and encouragement supplementing his instrumental orientation. After scene setting tympanic percussion, stirrings of Walter's guitar skronk and Smith's hyper kinetic arco bowing conjure an atmosphere of foreboding, made good by feral foghorn blasts of paint stripping saxophone. Although Bennett lacks the facility of Jones, he makes up for it in abrasive focus, building towards peaks of dissonance, before pulling back for another attempt, until finally cresting in a full blooded shriekathon. Hooker clearly has a penchant for strong bassists who can hold their own amid the mayhem as Smith's muscular elastic pizzicato and searing bowed bass cut through like a fire truck in traffic. Passages of walking bass and time sketched on cymbals add some light to the shade of the squalling upper register sax and guitar heroics, but the non-stop high energy group interaction remains the dominant feature. Great fun, but it is the other disc which grabs attention and ranks among the year's best.