By Doug Collette
July 11, 2021
Sign in to view read count
For a musical instrument so small, the range in sound(s) from a harmonica is nothing less than remarkable. The airy tones of Toots Thielemans and Howard Levy sound nothing like the earthy warbles that of Little Walter and James Cotton, while sinuous lines from the late Norton Buffalo, long-time member of the Steve Miller Band. hardly resemble the gutsy textures Magic Dick of the J. Geils Band blew so lustily he could practically replicate a whole horn section. Along those disparate lines reside the works of Wilburt Lee Reliford and Nic Clark, neither of whom might seem to have much in common besides their wind instrument, at least until a close perusal of their music reveals a deceptive level of nuance comparable to the capacity for detail intrinsic to their main instrument. 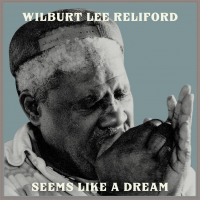 Far more than just a curiosity piece based on the origin(s) of its recording, Seems Like A Dream is a living, breathing object lesson in the timeless quality of the blues. Solo pieces captured in a studio over three decades ago become wholly contemporaneous as co-producers Bruce Watson and Will Sexton assemble a band to accompany the principal on half the tracks. More impressive still is the ensemble's backing on tracks such as "Coal Black Mattie" as it remains of a piece with the haunting likes of Reliford alone on "Sugar Mama." It's also a testament to the lively economy of Sexton as guitarist, along with his peers here including percussionist George Sluppick (The Chris Robinson Brotherhood), the City Champs, that all the musicianship comes sans affectation or any sense of the antiseptic often the bane of the studio; as such, it mirror the irrepressible playing of Reliford as he seeks to fend off the hellhounds on his trail with the alternately sweet and tart tones of his harp. 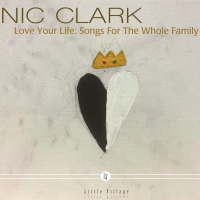 Notwithstanding a song called "Everybody Poops," Nic Clark's first album is decidedly not just music for kids. On the contrary, it maintains its continuity with other titles released by the non-profit Little Village record label, nouveau-folk music with a reverence for roots. In fact, Songs For The Whole Family reflects Clark's circuitous route from a childhood in Denver to playing with the progeny of blues icons, then recording his first album in California with the likes of guitarist extraordinaire Charlie Hunter. The latter actually contributes bass, percussion and drums. in addition his main instrument. on "Dance Party!" and "I Love Music" and his generosity of spirit is reflective of the convivial family atmosphere that permeates this album. Nic Clark himself amplifies that relaxed air weaving his harmonica lines in and out of the arrangements of tunes such as "Dinosaurs (Where Did You Go?):" at every other turn he takes on his instrument, he reminds how he and his comrades turn the Love Your Life LP title into an invitation hard to resist.

Love Your Life: Songs For The Whole Family

Tracks: Got My Family And My Friends; Dance Party!; Brand New Eyes; Dinosaurs (Where Did You Go?); Love Your Life!; I'm Your Friend; Everybody Poops; This Little Light of Mine; The Hungry Dog; Things to Learn; I Love Music!.