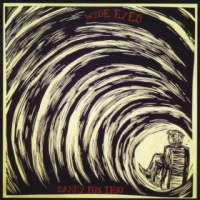 So many jazz piano trios, so little time! With Wide Eyed, the Danny Fox Trio proves very definitively that they are worthy of your attention. Fox' wickedly humorous, tightly-conceived, multi- stylistic compositions and his trio's remarkably sensitive interplay are completely attention-grabbing. One listen was enough to make me a believer. Like a lot of the more interesting piano trios working today, these guys are youngsters. Fox, a New York City native and Harvard grad, formed the trio in 2008. A prodigy of sorts who was selected as a Presidential Scholar in the Arts as a teen, Fox now appears to be in his mid-20s. Like a lot of players on the New York scene, he's involved in several interesting projects, including the New Orleans-inspired Tubby. Fox also maintains a fleet of sideman gigs in ensembles led by drummer Brian Adler, saxophonists Sam Sadigursky and Aaron Irwin, to name a few. And yet the music on Wide Eyed is so refined, beautifully played and thoughtfully composed that it's amazing he has time for anything else!

Drummer Max Goldberg first came to my attention for his incredibly detailed and creative work with the group Old Time Musketry. Bassist Chris Van Voorst Van Beest is a completely new name to me, though he's recorded with Pete Robbins, among others. While each individual member is an amazing musician, this trio has something even more important going for it: great chemistry. Fox' pieces are challenging to say the least, and Goldman and Van Voorst Van Beest play with the sort of ears and ease that permit all three to get down and dirty with the music. Their playing projects warmth, humor and intelligence throughout.

The pieces on Wide Eyed, across the board, have wonderfully convoluted structures. Piano, drum and bass solos appear where you least expect. Dynamics ebb and flow without warning or precedent. What seems like a pianistic nervous tic mutates and forms the foundation of a strange and beautiful melody. The closest Fox comes to straight- ahead jazz is on the bluesy "Short Al in Brooklyn," but even this piece doesn't develop linearly. The long melody is broken up over Van Voorst Van Beest's slowly evolving bass line. Fox' solo grows out of the composition so organically that it's hard to pin down where the melody ends and the improvisation begins. "Drone" is quirky, quick- paced piece that frames an equally quirky, and rather daring, bass solo. Goldman's undeniably funky drumming sets the tone on "All Tolled," a complex, multi-sectioned piece played with almost frightening urgency. Somehow, it winds up being mostly about different juxtapositions of the bass and piano. Fox spins out long melodic lines over rhythmically asymmetric bass and drum stabs on "Bonkers," but then the piece takes a turn down a completely different free-ish path for Fox' solo; or is it a duet with Goldman? "Tumble Quiet" ends the album on a less frenetic note, with Fox' playing some lush and mysterious melodies over gently percolating contrapuntal rhythms.

Fox' compositions, while totally 21st Century in their eclecticism and technical accomplishment, have more than a whiff of the old school about them. There are passages on "Confederates," for example, that are evocative of both George Gershwin and the Duke Ellington we all heard on Money Jungle (United Artists Records, 1962). On "Drone," there are moments that remind me of Dave Brubeck's personal synthesis of classical, Gospel, and jazz; but there's also a weird minimalist vibe going on as well. The one contemporary player whose work is directly comparable to Fox' is Myra Melford. Both have backgrounds steeped in classical music, and these classical influences show up unapologetically in their playing and composing. Both do inscrutable two-handed polyrhythmic stuff on the keyboard: the first dozen bars or so of "Sterling" and pretty much all of "Funhouse Memory" are simply jaw-dropping in this regard. And both play with a relentless forward-leaning rhythmic drive. Not that Fox is a Melford clone. Far from it—here is a young man with a fully mature, easily recognizable keyboard style. It's just that the music on Wide Eyed, with its combination of Baroque intricacy and modern jazz muscle, seems borne of the same sort of curiosity, energy and sense of wonder that made Melford's trio albums so memorable.