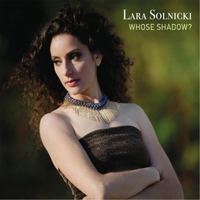 Canadian contemporary jazz vocalist, published poet and composer, Lara Solnicki originally intended a career in opera but turned to jazz in 2008 following a brief collaboration with a classical composer, in a conscious attempt to marry her two arts, music and poetry. She has emerged from the Canadian scene with a spellbinding voice and is highly sough after on the Toronto jazz circuit. Solnicki has been rightfully labeled a vocal purist with tremendous tonal control and naturally sings any jazz arrangement with relative ease. She is very active in the worlds of jazz and creative music and has been teaching vocal technique, piano and theory and musicianship skills, sight-singing, ear and rhythmic training privately for over 13 years.

Over three years in the making, "Whose Shadow?" was released March 30, 2014 to an enthusiastic crowd at Toronto's premium jazz club, Jazz Bistro. The release "Whose Shadow?" follows Solnicki's critically acclaimed debut album "A Meadow in December" (Self Produced, 2010) which still receives tremendous airplay. "Whose Shadow?" is an eclectic album about metamorphosis and influence and the conscious and unconscious shaping of an artist. Her impressive four octave vocal range journeys through ten delightful tracks featuring original compositions, traditional jazz fare, and classics to include "Sunset" (Kate Bush), "Shades Of Scarlett Conquering" (Joni Mitchell), and "I'll Remember April" (Patricia Johnson, Gene dePaul, Ron Raye) all with boldly unique style and vocal attitude of her own. Lara's voice is riveting, each word is clearly distinguishable and brings a refreshing and exciting tone to each selection.

Produced by George Koller (Holly Cole, Laila Biali, The Shuffle Demons), "Whose Shadow?" features an excellent accompaniment of many of Canada's world class jazz musicians who lay down the rhythm tracks while Lara Solnicki does her thing vocally as only she can. With exceptional tonal control and her mastery of inflection, Lara Solnicki is exciting to listen to and has without doubt, charted her vocal journey, affirming her position as a world class jazz singer.