Irreversible Entanglements: Who Sent You?

By Gareth Thompson
December 8, 2020
Sign in to view read count 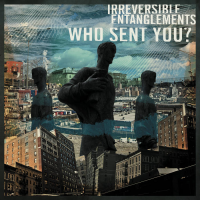 Irreversible Entanglements first came together to perform at a Musicians Against Police Brutality event in 2015, after the killing of Akai Gurley by the NYPD. Who Sent You? is their second album and was released in March 2020, two months before George Floyd's death at the hands of police in Minneapolis.

A five-piece collective, Irreversible Entanglements feature the voice and texts of Camae Ayewa, aka Moor Mother. An artist and activist from Philadelphia, her other works include the album Fetish Bones (Don Giovanni Records, 2016) which combined dark rap with analog buzzings and resolute lyricism. Black history and identity are crucial to her writings, but Who Are You? paints these elements onto a broader, even subtler landscape. There are four other Irreversible members, all of whom bring vital and distinct components. Each musician adds percussion to their own specialty, but full due must be paid to drummer Tcheser Holmes, whose haunting restless rhythms truly enhance Ayewa's scattered narration. The two of them performing as a duo would be some event.

Ayewa's input is economical and punchy, always knowing when to let the music take prominence. Her cryptic phrasing is so much the better for hinting, probing and stimulating. This album is way too smart for easy slogans—Ayewa uses poetry drawn from fragments of personal experience, yet never allows her ego to rule. The band offers textures of tension and ascension, tracing a line back to the brooding fire of Archie Shepp and Alice Coltrane. Elements of their International Anthem labelmates such as Ben LaMar Gay, Damon Locks and Angel Bat Dawid are never far behind.

"The Code Noir/Amina" opens with a ceaseless tingle and rumble from the drums and bass. This sits neatly at odds with the leisurely brass chords, like something Hypnotic Brass Ensemble might conjure. "Stay on it," advises Ayewa with a decisive wink. Is she talking to her musicians, or us the willing audience? Sax and trumpet glide over each other, often just a breath out of time as if heard from separate dimensions. "A mountain ain't nothing but a tombstone for fire," says Ayewa, her voice cool and conversational. Peaks of musical intensity arise; energy swells, then subsides in time with the narrator's sonic poetry. "When we step out of the daze, dumbfounded and dazed," she raps urgently, yet never rantingly.

"Who Sent You—Ritual" starts on the kind of free-for-all tumult with which Sun Ra began his shows to free everyone's mind. Over the wailing and pounding Ayewa turns brusque interrogator, asking an unknown party, "Who sent you/Who sent you/What did they tell you?" A sense of urban paranoia deepens with every sax squall or spacious drone. Ayewa's backyard has now become a strange planet, as hostile as any alien landscape. Halfway in we move to some muted folky-jiggery from the brass while peace is restored. But the bass and congas continue to provoke as Ayewa later muses, "Freedom for a while tasted so good."

"No Más" kicks out some joyous interaction as things get down and funky. The storyboard enters a realm of "Infinite possibilities" and a prospect of "Coming back around to love ourselves fully." Such positive thinking is easily spouted, but the refrain "No mas/no more" implies the need to empower our lives. Better to respond with devotion than hate, Ayewa suggests.

Images of a drunken stumbling Pope, spitting out the Hail Marys, feed into "Blues Ideology." Yet this fallen saint figure, depicted feeding lies, might well be a politician squatting behind religious pretense. Plenty of splashy drumming and feral blaring only add to the fierce character attack. Trashcan percussion and thick sultry bass then dominate "Bread Out Of Stone." Ayewa contents herself with a few choice words here, as if thinking aloud whilst making notes: "Tradition... Passed down... Timeless degrees of freedom... Making bread from stone... Tradition."

Who sent you? It could be something we'd ask of extraterrestrials, or a query that xenophobes might put to immigrants. But who are the real deviants posing a menace to society? Irreversible Entanglements seek to answer this by implying that spiritual upheaval feeds into the political. This is the point where fear becomes resistance. Not just an inspirational album, Who Sent You? also reminds us of music's therapeutic role in our lives.

The Code Noir/Amina; Who Sent You – Ritual; No Más; Blues Ideology; Bread Out Of Stone.