Home » Jazz Articles » Kjetil Mulelid Trio: Who Do You Love The Most?

Kjetil Mulelid Trio: Who Do You Love The Most? 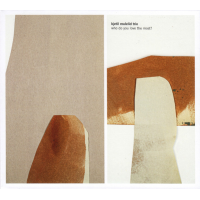 In an act which might have raised a few eyebrows, Rune Grammofon released Who Do You Love the Most? by the Kjetil Mulelid Trio on the very same day as In the Mountains by the Espen Eriksen Trio featuring Andy Sheppard. Surely these two piano trios on the same label must have been competing for the same audience? However, closer inspection reveals that such speculation is likely to be wide of the mark. Firstly, the two trios differ considerably in their ages, the members of the Mulelid Trio being born in the late '80's or early '90's, whereas those of the Eriksen Trio date from the mid-70's. While the younger trio first recorded together in early 2017, and the resulting album, Not Nearly Enough To Buy A House, was released later that year, by then the older trio had already released four albums, their first having appeared in 2010. So, Who Do You Love the Most? is the Mulelid Trio's third album, while In the Mountains is the Eriksen Trio's sixth. Another notable difference is that when the older trio recorded an album that was not solely by them, they added British saxophonist Sheppard, while, in contrast, the Mulelid Trio broke its run of trio albums with a solo album by the pianist and leader, Piano (2021)—Rune Grammofon's first solo piano album, by the way. Eriksen and Mulelid are both the main composers for their trios, with each one tackling occasional covers. On Who Do You Love Most? that cover is Judee Sill's "The Archetypal Man." The Mulelid trio occasionally includes a freely improvised track—the two-minute "C&R" on their debut, Not Nearly Enough To Buy A House, the ninety- second "Imagine Your Front Door," here—whereas the Eriksen Trio never seems to. That Mulelid solo album clearly demonstrated that he is perfectly able to play fluently and keep time without the support of a bassist and drummer. So, it is not particularly surprising that on this trio album bassist Bjørn Marius Hegge and drummer Andreas Skår Winther do not toe the convention line for bass and drums in a piano trio; in particular, they are not in the background with the piano being more prominent; instead all three play as equals, with each of them contributing to the overall sound and mood of the music. To summarise, both In the Mountains and Who Do You Love The Most? are excellent albums. Although subtly different, each is highly likely to appeal to listeners who enjoy a good piano trio. Yes, variety is the spice of life, particularly when it comes to music. Enjoy.

Paul; Endless; The Road; Remembering; Point of View; The Archetypal Man; For You, I’ll Do Anything; Imagine Your Front Door; Gospel; Morning Song.

Title: Who Do You Love The Most? | Year Released: 2022 | Record Label: Rune Grammofon