By IAN PATTERSON
December 4, 2010
Sign in to view read count 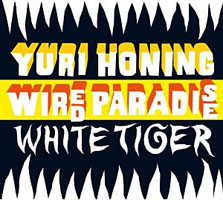 Dutch tenor saxophonist Yuri Honing is nothing if not versatile; in the last decade he has recorded with pianist Paul Bley, bassist Gary Peacock and drummer Paul Motian on Seven (Challenge, 2001); tackle Radiohead and Wayne Shorter compositions with the 51-piece Metropole Orchestra, conducted by Vince Mendoza, with Symphonic (Challenge, 2006); and interpret Franz Schubert's Winterreise song cycle, based on the poetic lyrics of Wilhelm Muller, alongside pianist Nora Mulder. White Tiger shows another facet of Honing's craft, the electric quintet Wired Paradise, and this live set, recorded during its 2009 world tour, is inspired by Indian author Aravind Adiga's Booker Prize-winning novel, The White Tiger (2008).

It would have been interesting to learn how Adiga's novel inspired music that was largely recorded on the group's first two studio albums—Temptation (Jazz in Motion, 2006) and Meet Your Demons (Jazz in Motion, 2008)—but the lack of liner notes requires the assumption that the book's emotional impact about India, where Honing has played many times before, made its way into the performances, which were mostly recorded in Mumbai.

Strikingly, for an ensemble that features two electric guitarists (Frank Mobus and Stef van Es), much of the music is spare in nature, with an emphasis on mood and nuance rather than virtuosity, though the group's sound is paradoxically powerful—a case of less is more. Honing's tenor has something of the pure tone of Jan Garbarek, and the lovely vocal quality of a balladeer. A gorgeous rendition of Björk's enchanting "Isobel," and David Bowie's "Space Oddity," follow the respective vocal melodies closely before Honing peels away, following his muse with muscular, searching solos which are all the more powerful, given the almost minimalist setting from which they emerge.

This intoxicating potion of minimalist soundscapes and visceral power comes together perfectly on "Petrae," whose lyrical, slightly melancholic melody takes wing when guitar and saxophone break loose. The slow groove, from bassist Mark Haanstra and drummer Joost Lijbaart, never quickens, instead, rising in intensity. Similarly, the smoldering "Isobel" bursts into flames before receding softly and "Rollo Thomasi" pads quietly either side of a sizzling guitar solo. The mold is broken on the punk-inspired energy of "Meet Your Demons," which is as short and sharp as a tequila slammer. "Tenzing Norgay," a nod to the Nepalese conqueror of Mount Everest, sees Honing's most explorative solo of the set, atop a subtle, dub-like groove. All the compositions are characterized by simple, seductive melodies, and the set closer, "Zitelle," is no exception. Mobus and Honing stretch out on another slow-burning piece adorned with under-the-radar psychedelic touches.

Wired Paradise is not the only group to mix jazz with pop, rock and punk, but the refreshing, disciplined approach and the at times almost epic nature of the compositions mark it out as one of the more original groups mining diverse musical genres. White Tiger is a beautiful, compelling recording, much like the book which inspired Honing.