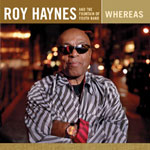 At 81 years old, Roy Haynes is one of the true wonders of the jazz world. His performances over the past decade have consistently demonstrated that he is the music's greatest living drummer, a title to which he can easily lay claim based on ability alone, although his age does make his energy and power all the more miraculous.

On Whereas, a live date recorded earlier this year at the Artists' Quarter in St. Paul during the Twin City's official "Roy Haynes Weekend, the high-octane octogenarian leads his Fountain of Youth Band—the combined ages of the three sidemen barely approximate Haynes' own—through a typically scorching set propelled by his relentlessly rhythmic drumming.

Whereas features the latest edition of Haynes longstanding quartet, with only the solid John Sullivan remaining (on bass) from the previous unit. Fiery altoist Jaleel Shaw succeeds saxophonist Marcus Strickland, the exciting pianist Robert Rodriguez takes over the piano chair previously occupied by Martin Bejerano, and the new group does an admirable job in navigating the intricate arrangements that showcase the leader's persistently prodding percussion.

In contrast to Art Blakey, who assembled an enormous repertory of music written by his sidemen, Haynes' impressive repertoire is culled primarily from the songbooks of the remarkable array of leaders with whom he has served. Here he features compositions by John Coltrane ("Mr. P.C. ), Chick Corea ("Like This ), Pat Metheny ("James ), Thelonious Monk ("Bemsha Swing ), Joe Henderson ("Inner Urge ) and Charlie Parker ("Segment ).

The set is filled out by Haynes' own tour-de-force Latin-tinged arrangement of Cole Porter's "My Heart Belongs To Daddy, one of the date's several pinnacles; the drummer's self-penned "Hippidy Hop, an extended drum solo that introduces the infectious "James ; and "True or False, a collaborative composition by Haynes and bassist Steve Swallow, first recorded when the two were both members of vibraphonist Gary Burton's '60s quartet and used here as a tag to "Bemsha Swing.

All of the pieces on the date are transformed by Haynes' amazing polyrhythms—his incredibly articulate, sure-footed pedaling of the bass drum and his signature sizzling sock cymbal constantly interacting as his hands circumnavigate the rest of his kit, driving the other soloists to some of their greatest heights.