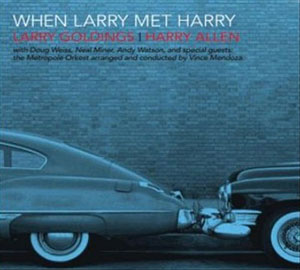 There is always a place in the world for beautifully played jazz, where the saxophonist doesn't sound like he's trying to inflict pain on his horn, and the pianist just hits all the right notes. Tenor player Harry Allen and his keyboard partner, Larry Goldings, are the musicians, and the album is When Larry Met Harryl.

Of the twelve tracks on the record, eight were penned by Goldings, which is noteworthy because they would sound right at home with a 1950s Ben Webster combo playing standards. They are mostly slow to mid-tempo tunes with an emphasis on melody and tasteful presentation. Mercifully, the affair never dips into a syrupy morass, even on "Benny's Dream," which features a string section in the background—a potential kitschy trap. The device, which is only deployed on this track, adds just enough effect to compliment the tune without overwhelming it.

"Bud's In Bloom," the most up-tempo song of the set, shows off some solid bebop chops in the tradition of Charlie Parker's best compositions, but without any frenetic eruptions to upset the overall tone of the record. This band can cook, but it does so in good taste. One of the few covers on the date, Burt Bacharach's "The Look of Love," brings the syncopated bounce of the rhythm section—drummer Andy Watson and bassist Doug Weiss—forward into the mix, as the leaders lay back on a song that's as much about the notes that aren't played as the ones that are.

Despite its generally laconic pace, this is a tautly performed album. The musicians are clearly in sync with each other, and there are virtually no musical loose ends in evidence. Allen is a buttery, warm player with an elegant tone, and a gentle but insistent presentation. Goldings sticks mostly to the piano, but overlays some very subtle keyboard accents throughout. The production values are very strong, with a natural presentation and big wide soundstage. The piano, in particular, sounds very full and lifelike, captured with all of its harmonic textures intact.