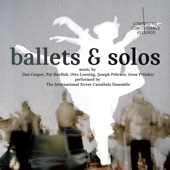 If Ballets & Solos is any indication, then at least five young composers in the US are breaking barriers between genres and idioms. These young folks are brimful with ideas, humor and humanity, their compositions performed with wildly interesting and improvised cadenzas. The absolute command of melodic and harmonic invention is even more interesting. More than that, the sublime understanding of the tonal palettes of strings, middle register brass and lower register woodwinds—and, of course, the oceanic capability of the piano. That this is on display on the compositions of this album, by five noteworthy young composers is only one part of its attraction.

The other aspect of this work is a grasp of form. This is, of course, limited to the so-called form of ballet and other dance that is almost visually depicted on Otto Leuning's two compositions; "Fantasia and Dance" and "Dance Sonata" are interwoven into sonata form, with their bold brush-strokes and statements of brilliantly daubed themes, and the thoughtful exposition that weaves in, out and around a brooding echo of dominant chords that harmonizes, with swerving melody, all over the keyboard. Dan Cooper's "Dance Suite" is also well-conceived, and rushes onward like lapping waves that swirl and pirouette as the music unfolds, as if in the fluidity of dancers' bodies and souls.

Joseph Pehrson's "Good Time" is a fine sketch that might as well have been a feisty ballet, enacted as if a carnival had burst upon a stage. Electrifying colors explode as the music unfolds, and the International Street Cannibals Ensemble gives a fine reading of this good-humored study. Pat Hardish contributes "Solo for Pete," a challenging short work for solo drum set, with Peter Jarvis rising to the occasion with a command performance on the drums.

Gene Pritsker is the probably the best-known of the composers represented on Ballets & Solos. His work deals with complex situations and is also quite volatile. The mercurial emotions of "A Challenge to the Dark" is typical of Pritsker's brooding complexity, as the character's emotions tumble downwards, descending into the depths of despair before rising outward to a considerably brighter resolution. "Dead Souls" is deeply spiritual, and another descent into an almost Dante-like Purgatory and Hell before, once again, emerging triumphant in the glory of Greg Baker's classical guitar.

Violinist Lynn Bechtold also gives a fine account of her virtuosity and technical expertise as she negotiates Luening's "Fantasia and Dance." But the entire International Street Cannibals Ensemble deserves special mention for bringing to life a selection of modern pieces that run the gamut of tonal color and timbral experimentation with definitive skill and absolute mastery.