Home » Jazz Articles » The Ordinary Square: When in Paris

The Ordinary Square: When in Paris 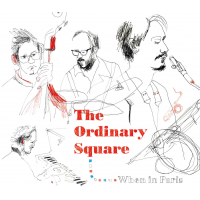 When in Paris (Hoob Records, 2015) is a multifaceted album. The complexity of the French capital is explored with a collection of songs that range from sublime to swinging.

The nine original compositions by bassist and bandleader Viktor Skokic provide a platform for the members of this intriguing ensemble to engage in energetic interaction with maximum room for spontaneity and whim.

Skokic, who surfaced on the trio album Perfectly Still (Footprint, 2014), wrote the music performed here during a winter month in 2014 enjoying the city of Paris and, presumably, its nightlife. He returned to his adopted hometown of Stockholm and set about fleshing out a series of sketches of songs based on his time there for his newly established quartet The Ordinary Square.

The four members all hail from Sweden's two largest cities, namely Stockholm and Gothenburg, and have all appeared at music festivals, concert halls and clubs around the world. Now, they converge for the first time on record and the result is very promising indeed.

When in Paris starts of with the "bouncing rhythm and swinging melodic jazz" (Skokic's own words) of "The Ordinary Square" and slides almost seamlessly into "Mémoire Distordue." Both songs feature agreeable solos from tenor saxophonist Eric Arellano and a real tightness between the four musicians.

However, it is over the following seven songs where the magic appears. While the theme of the album seems to be the time Skokic spent in France, there's more going on here than initially meets the ear. You see, over the course of the album, the quartet seems to actually develop: both maturing and gelling into a cohesive lot.

Among the highlights, a subdued Paris during wintertime comes to life on "Mr R & Mr V" and a fitting tribute to the German composer Sigfrid Karg-Elert, best known for his compositions for organ and harmonium from early twentieth century, appears at the end of the recording in the form of ""Till Karg-E." Throughout, the musicians give it their all to make this unit sound as one.

On this remarkable recording 'Paris' could well stand as a metaphor for such emotions as love, doubt or any number of other human conditions that have given poets and songwriters food for thought for centuries. Regardless of the source of the inspiration, When in Paris is a worthy showcase for four promising musicians with the world (not just France) at their feet.

About The Ordinary Square