By Glenn Astarita
June 10, 2012
Sign in to view read count
Track review of "Trees And The Old New Ones" 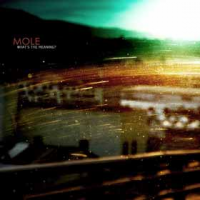 Mole evolved via Mexican pianist Mark Aanderud and Argentinian drummer Hernan Hecht's alliance back in the early 2000s. With eminent New York City-based guitarist David Gilmore and Mexican bassist Jorge "Luri" Molina rounding out the energized quartet, What's The Meaning is an inspiring debut outing. Briskly moving amid some high-impact detours and buoyant time signatures, the band forges an acoustic-electric colossus and flirts with disparate genres along the way. Strong compositions, clever arrangements and fiery outbreaks elevate the album into stratospheric regions, but "Trees and the Old New Ones" imparts temperance, warmth and accentuates the musicians' deep-rooted compassions.

Molina's somber arco-bass passage launches the piece, followed by his cohorts' soft accompaniment. It's a pensive ballad, spiced with a memorable hook and introspective attributes. With his dark-toned electric guitar lines, Gilmore's improvisational solo takes on searching qualities, where the band surges ahead with deftly implemented mosaics and flourishing harmonic output. Here, Aanderud sprinkles lyrically resplendent theme-shaping melodies over-the-top, as the band morphs its bridge back into the opening cadenza with grace and poise, for a piece that vividly offsets many of the program's electrifying episodes.