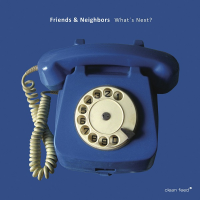 With its fourth release, the Scandinavian quintet Friends & Neighbors, whose moniker references Ornette Coleman's album of near enough the same name, continues to find fertile soil in the American free jazz furrow. This time out the unchanged quintet of trumpeter Thomas Johansson, reedman Andre Roligheten, pianist Oscar Grönberg, bassist Jon Rune Strøm and percussionist Tollef Østvang looks both further forward in its untethered rhythms, and back in a nod to hard bop, than its source inspiration.

In a program comprising eight originals, Roligheten, Grönberg and Strøm each demonstrates the art of thoughtful arrangements, with swinging tunes which belie their apparent simplicity. A lot happens below the surface, as on the opening "Influx," a woozy summery ballad where horns and piano repeat a unison theme, while drums and bass enjoy a constantly changing dialogue. Or "Euro" where the jaunty melody line is split between bass clarinet, trumpet and piano. Later in the piece, Strøm also shows he has absorbed something from Charlie Haden during the course of his nimble yet spirited solo.

Not everyone takes the spotlight on each track and there are often different settings for featured players. On the jittery "WLB," Roligheten builds his staccato tenor saxophone outpouring from the thematic material, while walking bass prevails for Johansson's exuberant trumpet excursion, and Østvang stretches out over the punchy horn motif at the close. Similarly in the boppish stop-start "Mozart" where the trumpeter expressively rides the buoyant contours, while later Grönberg pitches his Thelonious Monk-ish piano against a riffing trumpet obligato. In fact the pianist invokes a wide range of influences in his imaginative playing and spare skewed backing, and offers a bluesy tinge on "Reflection."

This is a band that cuts to the chase on a series of concise pieces which joyfully challenge the conventions of the modern mainstream.