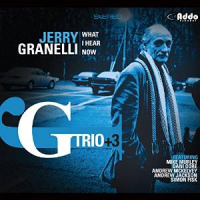 This is what master drummer Jerry Granelli hears now: a wide variety of left-of-center music that circumvents strict harmonic corralling, thanks to the absence of guitar or piano, and makes good use of multiple horns. Of course, if you catch Granelli a few months down the road, he might hear something completely different.

Over the past half a century, Jerry Granelli has been making his mark by being his own man. Who else but a staunch individualist could make his initial splash(es) by holding down the drum chairs in the Vince Guaraldi Trio and the Denny Zeitlin Trio. And that was just the beginning for this inside-outside talent. Subsequent work supporting everybody from saxophonist Jane Ira Bloom to guitarist Robben Ford solidified Granelli's reputation as a sideman, but it's his leader dates that really show the scope of his imagination.

For nearly three decades, Granelli has been cranking out creative music under his own name—about twenty albums in all, including sessions with two guitars, outré duo dates, horn-heavy outings, and more. Here, Granelli builds on the trio he has with bassist Simon Fisk and saxophonist Dani Oore, adding two other saxophonists—Andrew McKelvey and Mike Murley—and trombonist Andrew Jackson to the mix. The resultant music, not surprisingly, is highly eclectic.

What I Hear Now opens with "Prologue," a number that finds saxophones in search mode, looking to and fro for answers. "Run Danny Run" keeps the focus on the horns, but Granelli joins in, contributing to the pointed rhythmic dialogue that urges the song forward. Then there's the desert stroll of "Walter White," grounded by the bass-drum hookup of Granelli and Fisk; the noir-ish "Mystery," a number which is smoky and wholly seductive; the slinky and hip "Dance For Me"; the slow-moving, horn-centered "Another Place"; and "The Swamp," a killer odd-metered groove number that never feels odd. In less than forty minutes, Granelli convincingly covers more ground than plenty of other musicians could cover given several albums worth of space.