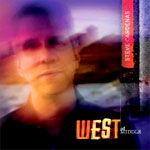 Guitarist Steve Cardenas sports an unassuming style, devoid of histrionics. He favors clean tones, solid rhythms and cagey harmonies for a subtle, supportive approach. It's a combination he's used to help shape the music of drummers Paul Motian and Joey Baron, bassists Alexis Cuadrado and Charlie Haden and vocalists Kate McGarry and Rebecca Martin, among others. On West of Middle, only his third record as a leader, Cardenas enlists drummer Rudy Royston and bassist Ben Allison, with whom he's developed a strong rapport in the latter's group. Their interaction propels the mostly mid-tempo, blues-rock-influenced material, which doesn't shatter any boundaries but reflects the leader's tastefully crafted aesthetic.

"Burt" opens with a clean, rhythmic line and rockish groove that Royston colors with quick accents and fills. Allison takes a throbbing turn featuring his percussive string attack, eliciting a fluttered retort from Cardenas and tight snare cracks from the drummer. A tumbling movement permeates "Roundup," with the guitarist and bassist parrying notes without a firmly established beat, until Royston's ride pattern entices Allison to join as Cardenas continues to riff. A stiff mid-tempo backbeat supports the title track, its song-like theme ripe for Cardenas' fluid improvisations.

The sole cover, pianist Keith Jarrett's "Blue Streak," finds a grittier tone from Cardenas in the opening section before the knotty movement and clipped rhythmic support of the main theme asserts itself. "The Horse You Rode in On" boasts a woozy melodic line that Royston plays off of nicely, punching up the slippery guitar. The leader's shimmering guitar smolders, eventually reaching a climactic crescendo on "Drifting." "Backroad" closes the set and as the trio starts to stretch out, they draw to an abrupt finish, with a tantalizing hint of a less-restrained sound.

Clocking in at about 40 minutes, with only one song reaching the 5:30 mark, West of Middle is a taut collection, Cardenas' concise songs provoking lively dialogue without becoming garrulous.