By DOUG COLLETTE
November 2, 2019
Sign in to view read count 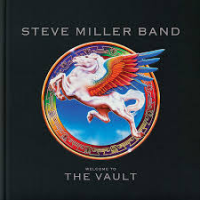 Ostentatious it may seem at a glance, the superficially lavish packaging of Welcome to the Vault may to a great extent allay the skepticism in a knowledgeable music lover all too aware of the multiplicity of previously-issued collections/anthologies of the Steve Miller Band. Above and below a large 3D-rendering of the 'Pegasus" logo, the silver embossed lettering on the front of the eleven by eleven cloth hardcovers belies the somewhat kitschy peripherals within. But, because the content within is conceived and executed with such class, even a generic b&w poster, color postcards, a replica stage pass and two handfuls of guitar picks cannot diminishes the initial impression.

In addition, essayist/interviewer David Fricke displays his usual matter-of-fact passion in his prose and it echoes all the more deeply as it' s juxtaposed, over the course of the hundred some pages, with a multitude of vintage photographs of "The Joker" throughout his career (as well as the picturesque site of his archive and some of its contents). Yet one of the most important points may get lost in the vivid depiction of the stop-and-go course of Steve Miller's history, that is, this is but the first of a series of such releases.

Add to that the prevailing blues influence Fricke notes in what is contained on these three CD's and one DVD. Following a general adherence to chronology, the co-producers of Welcome to The Vault (Miller himself and Janice Ginsberg Miller) imbue the collection with its own logic, one that's not wholly tied to his most famous recordings: within these seventy-three cuts, a precious few of those appear due to familiarity affored by their tremendous commercial success, familiar territory covered via the first release on his Miller's own Sailor Records label imprint, Ultimate Hits Deluxe Edition (Capitol/UMe/Sailor, 2017).

A single corresponding compact disc of thirteen tracks, Selections From The Vault, contains roughly the same proportion of previously-unreleased content as the companion piece, those in addition to immediately recognizable titles like "Jet Airliner" and "Fly Like An Eagle" that appear in alternate and sometimes (as with the latter) radically different versions. Similarly rare live and studio recordings otherwise dominate of Welcome To The Vault and there's every reason to think Steve Miller spent as much time choosing and organizing them to accurately mirror the fifty-plus year arc of his endeavors. In doing so, he refuses to indulge in excessive hubris, but rather justifiable pride: 'Maurice' (as he once referred to himself in song) is as intent on capturing the spirit as much as—or in some cases more than—the precision in the musicianship on outtakes like "Tain't It The Truth." Meanwhile, the implicit skill of his band leadership permeates the proceedings: in this particular context, witness the litany of names in the track-by-track credits, especially how many come and go and come back again (not just bassist Gerald Johnson: composer/keyboardist//vocalist Ben Sidran was a regular accompanist and songwriting partner of Miller's fledging SMB).

The preponderance of blues (even in an accompanying role for Chuck Berry at Fillmore West on "It Hurts Me Too") and acoustic sounds ("Seasons," "Wintertime") may startle listeners familiar only with Steve Miller's hits. And even long-time followers who witnessed his sets of wooden music in the Seventies (a reminder of which appears on the DVD) may still wonder with delight at the stripped-down likes of "Kow Kow Calculator." But moments such "Super Shuffle" from 1967 (which reappears on the DVD in a short excerpt from the SMB set at the Monterey Pop Festival) are revelatory and not just because Les Paul's god son rarely assumed the guitar hero spotlight: his touch, feel and imagination practically define the concept of 'shredding." Perhaps only fanatics who still worship Eric Clapton could effectively argue the Texas transplant's mid-tempo arrangement of Robert Johnson's "Crossroads" doesn't cut Slowhand's during his days leading Derek and the Dominos as on Live at the Fillmore (Polydore, 1994).

Notwithstanding a fascination with technology that led Miller to the early use of the echoplex (and even title a tune accordingly) and the Roland synthesizer, his adherence to quality sound on Welcome To The Vault did not lead him to impart the set with high tech features like 5.1 Surround Sound or Dolby Atmos audio. Perhaps that's because, with sonic sources varying almost wildly over the course of all these largely unreleased selections (including the video from a 1974 appearance during Don Kirshner's Rock Concert), such enhancements might be moot at best and all for naught at worst. Like the 1968 version of "Living In The USA," examples of 'finished products,' however, ring loud and clear. even in the otherwise ever-so-slight form such as "Abracadabra" (included for good measure in a slick 1982 performance clip).

The comprehensive but nonetheless subtle nature of most of what's inside Welcome to The Vault nevertheless begs the question of how broad its potential audience might be. Certainly Steve Miller's most loyal fanbase should be delighted with what's here, even as the very expanse of material (not to mention its rootsy authenticity) may be lost on owners of previously-issued, now out-of-print compendiums like the otherwise ostensibly wide-ranging (at the time) Box Set (Capitol, 1994).

Yet even as expansive as is this set, Steve Miller only whets the appetite of those longstanding devotees. And that is exactly that demographic for whom additional archival exhumations, concentrating as much (or more) on various earlier phases of this musician's career, certainly will have an attraction equal to, or perhaps even greater than, the later ones. For instance, the man known to be outspoken to a fault—see his screed on the Rock and Roll Hall of Fame for instance—sounds wry and self-effacing on a drastically re-arranged "Take The Money And Run." And he is comparably respectful and affectionate for the purposeful tribute to T-Bone Walker that closes the set: dual offerings "Lollie Lu" recorded over sixty-years apart, one by the icon himself and one by his pedigreed admirer.

As much territory as Steve Miller so creatively covers on his Welcome To The Vault, he still leaves plenty of ground left to explore. As Fricke notes, through an underlying theme in an essay drawn extensively from interviews with the self-professed "pompitous of love" himself, the story he tells isn't just his own, but the story of the music upon which he so dotes.