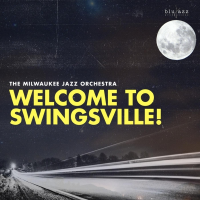 Even as the likelihood of big-band success keeps shrinking, there are those who willingly laugh at the odds and stay true to their heart, which insists that they keep on swinging even when common sense says they would be better off pursuing other musical avenues. They can be found occupying small pockets of resistance in cities and towns from coast to coast, engaging in a labor of love that is no doubt intellectually and emotionally rewarding but can't possibly pay the bills.

From time to time some of these groups come together, pool their resources and manage to record an album to display their talents and let those in other places know that jazz is alive and kicking in their little corner of the world. As a case in point, there is the Milwaukee Jazz Orchestra whose debut recording, Welcome to Swingsville!, serves as an admirable survey of the ensemble's prowess as well as a persuasive declaration that big bands haven't yet vanished from the scene in urban Wisconsin.

The MJO is the brainchild of saxophonist Curt Hanrahan, an alumnus of the University of North Texas' acclaimed One O'Clock Lab Band who is director of Jazz Studies at the University of Wisconsin-Milwaukee. For the recording, Hanrahan brought together a group of Milwaukee's finest sidemen (and women) including two members of his family, son Tim Hanrahan on bass and brother Warren Hanrahan on drums, then scrupulously mapped out a varied program that consists of two standards, three originals (two of them his own), Juan Tizol's venerable "Caravan" and a rare collaboration between Charlie Parker and Gil Evans, "Blues in C."

The result is an engaging session in which the orchestra performs respectably while the (unlisted) soloists are generally reliable and pleasing. Don Schamber's arrangement of "After You've Gone" is splendid, as are guitarist Steve Lewandowski's samba (or bossa) "Jocko" (on which he's the main soloist) and Hanrahan's lively "Imp" and bluesy "Seattle." That is certainly Sarah Fritchen's nimble soprano brightening "Imp" and doing likewise on Jack Carter's plain-spoken arrangement of "Caravan." Naming the trumpet soloists on Frank Loesser's "Brotherhood of Man" would be pure guesswork, so that's best left unsaid. Parker / Evans' "Blues" (with electric keyboard) shuffles along nicely and closes the album on a winning note. In sum, a sprightly studio session that proves above all that the art of swinging remains operative and well in Milwaukee.