BY KARL ACKERMANN
November 2, 2018
Sign in to view read count 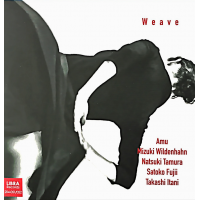 The year-long Satoko Fujii sixtieth-birthday project enters its final quarter in autumn 2018 with the stellar Weave. In a year of surprising and unusual releases, her newly assembled quartet—Amu—represents Fujii at her most unconventional yet accessible. The group includes Fujii's husband and frequent partner Natsuki Tamura on trumpet and percussion, drummer and percussionist Takashi Itani and percussive dancer Mizuki Wildenhahn. The mixed-media release consists of an audio disc and a DVD that features six of the seven audio pieces; the two components do not represent a zero-sum game for the listener/viewer but certainly enhance the overall experience.

Itani has a deep history with Fujii having been part of one of her namesake quartets, and the Tobira quartet, as well as her New Trio on Spring Storm (Libra Records, 2013). Itani self-released a solo album in Japan, Somehow, Dreamlike (2013) where he played piano in addition to drums. Wildenhahn's relationship with Fujii dates back to 2008 when she began incorporating dance into the pianist's live performances. She was also part of the Fujii quartet known as Dos Dos, a group that features on the Weave line up (minus Faín Dueñas as the drummer and percussionist). Wildenhahn's percussive dance has also been featured on a recording by pianist Aki Takase and saxophonist Silke Eberhard.

Wildenhahn's movements, and the scraping and rustling of Tamura's trumpet, set the stage for the cinematic sweep of Fujii's piano as the seventeen-minute "Megosona" opens the set. Building in force, Itani exercises restraint in keeping the drum kit from obscuring all other percussive effects even as he subtly drives the piece forward. Fujii and Tamura escalate the music to a fevered pitch before the trumpeter slows the pace with a more natural solo. Each of the selections on Weave is improvised though they sometimes sound more fully scored. There is a great deal of variety in the program as with "Nesimo"—an extended technique trumpet and percussion piece, and "Ubega," a largely abstract piece wrapped around Fujii's discordant piano. "Rimaketo" is a remarkable achievement on its own; a fascinating meeting of percussion and rhythm.

Dancing and drumming have always been intrinsically linked in West African, Indian and Afro-Cuban culture. In assorted modern variations, the combination has been the basis for the off-Broadway show Stomp and can be heard as recently as drummer Royal Hartigan's solo tap-dancing on Ancestors (Innova Recordings, 2010). The mix however remains a rarity in recorded music. A full appreciation of Weave can best be realized after watching the DVD performance. The visual not only adds clarity to the three percussion contributors, but provides a memorable humanization of Fujii's always demanding and complex approach to music.