Amok Amor: We Know Not What We Do 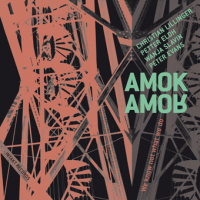 When these gents run amok it's largely controlled, spiced with massive quantities of mind-bending narratives, crazily executed pulses and split-second paradigm shifts. You can also think of a welterweight boxer landing rapid flurries, stinging uppercuts and roundhouse knockout blows as they punch out these works with the greatest of ease, shaded with ominous intentions.

Formerly a Germany-based trio known as Starlight, American trumpeter Peter Evans (Mostly Other People Do The Killing) adds his prominent technical faculties and astute improvisational tactics to these whirlwind excursions. It's all amplified and paced by the mind-boggling cadences provided by drummer extraordinaire Christian Lillinger and bassist Petter Eldh's fluent reinforcements.

"Body Decline" is built on the frontline's swarming choruses and drawling extended notes as Lillinger goes on a rampage, leading to a succession of alternating currents and Evans' brazen soloing. Here the band gels to a hurried pace. Yet the entire program is ingrained with unorthodox beats and the group's breakneck momentum. However, "Alan Shorter," is a dirge-like ballad, offset by the drummer's rather skittish accents amid several curveballs tossed in for good measure. And "Enbert Amok" is a nervy jaunt, marked by the hornists' fluttering theme-building episodes and contrasting components that often transform into various off-centered grooves.

The musicians summon imagery of assembling a jigsaw puzzle via crafty subplots along with Eldh's single pluck of a bass string that drifts into eternity, as the band generates something akin to an abstract dance, abetted by contortionist-like movements. Thus, if you're of sound mind and ready for some action or simply up for the occasion, this production most assuredly fits the bill, in addition to some good-natured soul-cleansing along the way.

Title: We Know Not What We Do | Year Released: 2017 | Record Label: Intakt Records