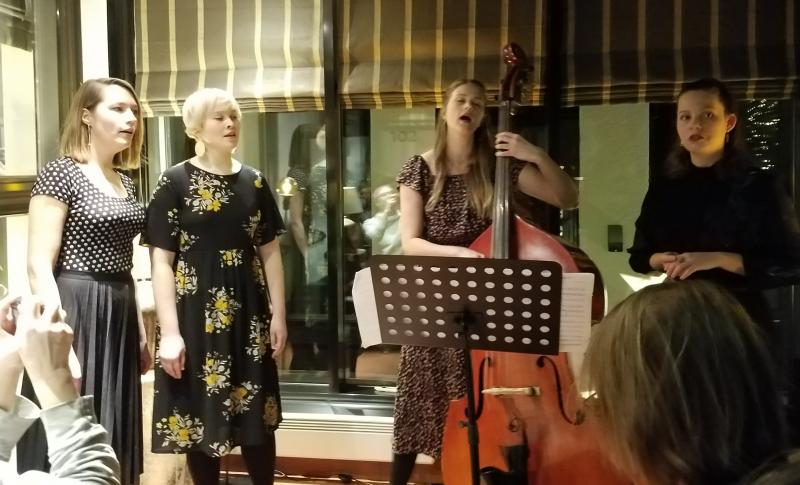 By JOSEF WOODARD
December 16, 2017
Sign in to view read count

We Jazz, which also runs a young record label, is lean, mean, risk-embracing and ambitious, a fine role model for how a jazz festival can operate.

Although Finland has long had a vibrant jazz life, both in terms of its musician population and support for music coming from America, Europe and beyond, there has been a curious lapse in terms of festival representation in the central city of Helsinki. The now 37-year-old Tampere Jazz Happening (in Tampere, Finland's second largest city) has earned bragging rights as Finland's grandest and most adventurous jazz fest, and the summertime Pori Jazz Festival has a more commercialized, party-time reputation. April Jazz, in Helsinki-adjacent Espoo, is more mainstream jazz affair. But Helsinki, home to many of the country's finest jazz musicians and the Sibelius Academy among other cultural landmarks and national highlights, has long been in wont of a jazz festival to call its own. Until recently, that is.

Enter We Jazz, still young but fast gaining its footing and ever-widening reputation. Celebrating its 5th year—generally, the first milestone achievement in the young life of a festival—We Jazz, founded and run by Matti Nives, is at this point a fairly modest but increasingly respected endeavor with some big ideas up its sleeve. One of the seminal ideas was to schedule a fest in an "off-season" jazz calendar margin, in mid-December, after the major fall festivals in Europe and before the holidays and the doldrums of January.

Most daringly, and as an indicator of a new breed of festival culture, which takes up the moveable feast model of how a festival can operate, with an ever-shifting array of venues for each of its shows. During my visit, over five days in December, the itinerary led me and comrades all over the city (a smallish, doable and uniquely, eccentrically charming city), from hotel rooms to vintage moviehouses, coffee houses, a gallery, a sprawling industrial area space normally a techno club (the Saturday night mini-festival-within-a-festival) and a former tram repair yard transformed into a cultural center. To say the constantly GPS shifting experience was dizzying, and refreshing, would be an understatement.

Fittingly, my own return visit to Helsinki opened with a walk to the waterfront on December 2, where a fireworks show lit up the sky over the harbor and near the Presidential Palace, as a highly public culmination of Finland's 100th Independence Day. The familiar strains of Jean Sibelius' "Finlandia," widely considered to be Finland's de facto anthem (despite the existence of an actual anthem) boomed out over the massed crowd, tellingly: this highly cultured, northern outpost of a nation holds as one of its national heroes Sibelius, its best-known composer.

Coming more from a contemporary and multi-idiomatic "new thing" perspective, the female group known as Signe presented what was, to these ears, one of the more exciting sets of the festival—and without resorting to obvious excitation or intensity agents. These tautly-connected quartet of vocalists—one being bassist-vocalist Kaisa Mäensivu, who has been studying in the U.S. recently—conjured up a compelling and malleable ensemble identity, moving between folk music links to classical and jazz sonorities, and more experimental touches. The sum effect was quite stunning, and ear/mind-opening.

A strange convergence of cultural reference took place as we moved to the second venue, the Dubrovnik Lounge and Lobby, in a large, deliciously kitschy compound owned by the famed, quirky Finnish cinema legends—and, indeed, living national heroes —the brothers Aki and Mikel Kaurismaki (with a filmography including Leningrad Cowboys, Matchstick Girl, The Man Without a Past and the brilliant new Aki-directed The Other Side of Hope). A combination pool hall and tiki bar upstairs and Dubrovnik nightclub and Andorra movie theater downstairs conspire to create a major hang zone one can sink into for hours at a time, with Kaurismaki-esque ambience by the gallon.

The theater setting was ideal for one of the "discovery" artists of my trip here—the Estonian-born and Copenhagen-based saxophonist of note Maria Faust (a significant part of a particular strong contingent of female musicians on the festival program this year). Faust's fascinating octet, the jazz-meets-chamber-meets-village-band called Sacrum Facere, buzzed and brooded with her inventive, contemporary and folkoric music, which she described as being "very nationalistic. It is about Estonia. It is about suffering. I will take my music into a little Estonian village. The rest is in your imagination. Hope you like."

We liked. Hers is a beguiling, ethno-personalized admix of dirges, free outings and other creative extra-jazz twists. Her We Jazz reputation preceded her, having heard and been seduced by Faust's solo sax set (with organic looping additives) at another beauteously funky and atmosphere-rich old theater, the WHS Teatteri U:NI:ON, the night before.

In the Dubrovnik, this festival's token American act, the Jochen Rueckert Quartet (another drummer-led unit, with master tenor saxophonist and still underrated Mark Turner, nimble guitarist Mike Moreno and bassist Joe Martin), settled in for a hot winter's set of contemporary, clever and sometimes metrically tricky combo sounds. The stage, aesthetic dynamics, and cultural instincts were reset with the arrival of the delectably cool Megalodon Collective, a Norwegian/Swedish seven-piece outfit (horns, guitar, bass and two drummers flanking the ranks) which cooks up intricate rhythmic machinery, avant-circus elastics and obliquely tuneful bursts, among other virtues making this a "band to watch/listen for."

On Saturday early evening, the chordless, tenor sax/trumpet-fronted Joonas Leppänen Alder Ego (once again, with a bright, drummer-composer in the driver seat), ideally suited the ambience of the Helsinki Contemporary Gallery on Boulevardi. A thought-provoking and visceral set, boasting saxophonist Jamo Tikka's fervent intensity balancing out trumpeter Tomi Åkerblom's cooler customer approach, ended with an site-specific encore of "Cubism," with shades of Ornette Coleman and a musical translation of Cubist Georges Braque in the expressive palette.

A five-hour, five-act, two-stage gathering at the industrial real estate of the venue called Ääniwalli owned Saturday night, and lured out an unusually young-leaning crowd, who savored such sounds as the edgy-but-accessible and wholly entertaining British drums-sax duo Binker and Moses, and the electro-ambient jazz group Virta.

Closing out the night, with the evening's most (artfully) noisy set, was drummer/electronician Olavi Louhivuori's Immediate Music 1. Alongside Louhivuori's role as benevolent leader, Pekko Kappi played the bowed jouhikko, vocalized and wrangled electronics as part of a waxing, waning and howling free musical experience which worked up a massive wall of sound (if only Trump were interested in that kind of wall). But it also scaled downward into a teasingly tender false ending gambit replete with music box tinkling, capped off by a bracingly cathartic caterwaul from Teemu Korpipaa's synth sandbox.

Sunday's fare went from the young and gifted JAF Trio at Good Life Coffee to the previously-mentioned cultural compound, the Korjaamo/Kulmasali. In this comfortable, repurposed space on another Helsinki outskirts zone, the musical program opened with the gleaming art-pop creations of Kate Bush-ish/Becca Stevens-ish singer Anni Elif (Finnish by way of Swedish-Turkish heritage). That group set contrasted the festival finale, in which drummer Teppo Mäkynen's conspired, duo-wise, with an old ally, tenor saxophonist Timo Lassy. An instantly identifiable and easy rapport between the players included willingness to both boot up the funk machinery and explore outer limits of free play (with Mäkynen's imaginative but ever neatly-controlled instrumental approach in contrast to the saxophonist's more free-ranging spirits).

At age five, We Jazz, which also runs a young record label, is lean, mean, risk-embracing and ambitious, a fine role model for how a jazz festival can operate. Logistical and fiscal challenges are ever-lurking, but some collectivist spirit is abuzz here, boding well for this festival's future. Among the musical questions it sparks: ho knew December in Helsinki could be so chockablock with jazz-fueled inspiration, and so many venues on the fly?