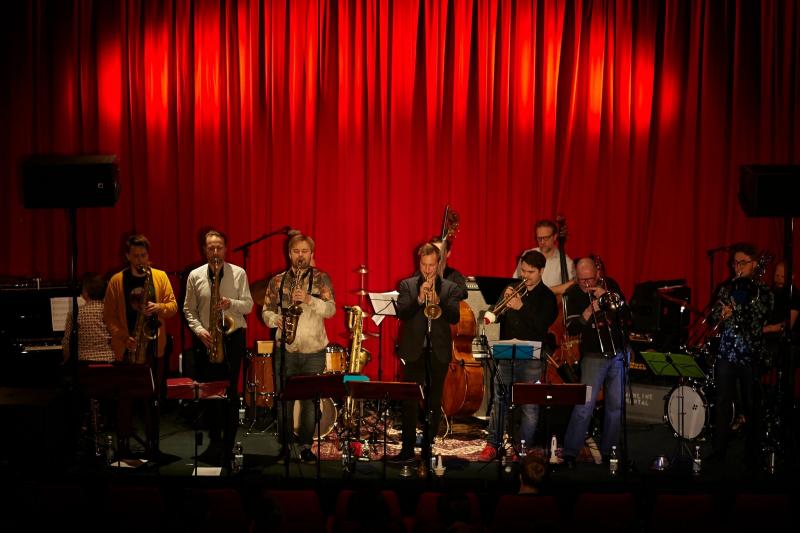 Most of the pieces were taken from the band's album, throwing multiple musical references to the audience before pulling the carpet from under our chairs and making us reach for our ear-plugs.

The winter We Jazz 'event' has been running for four years now, and founding mentor Matti Nives is somewhat challenged to find suitable new venues to take his artists to, having established a tradition of taking jazz to improbable places. These have included private flats, far-flung small venues as well as traditional medium sized concert halls in Helsinki. Despite these precedents, this year the venues for the 19 shows ranged from a pint-sized local corner cafe with folding chairs squeezed into every nook, via a former mental institution to the very amiable locale of Aki Kaurismäki's cinema Andorra in downtown Helsinki -the scene for one of the main all-Finnish billings, local reed multi-instrumentalist Mikko Innanen and his conglomeration of luminary local jazzers playing his compositions under the title Innanen 10+.

For folks used to thinking in terms of national stereotypes Innanen and his crew break almost every hackneyed Finnish prototype of the obsessive, introverted even retentive Nordic. Ranged across the rather shallow stage in the front of the chintzy red cinema chairs, these twelve colorful musicians took their roles in the drama that makes up a performance of Innanen's music. They included two representatives on drums, bass, trombone and trumpet, plus two additional saxophones and a pianist. And each of these players a highly regarded Finnish jazz instrumentalist, from trumpeter Verneri Pohjola to bassist Ulf Krokfors to name just two.

When playing solo or with smaller combos (Innkvisitio, Plop or his Trio come to mind) Innanen frequently abandons his baritone or alto saxophones for an array of other blown sound sources, from whistles to kazoos, as well as found objects and paraphernalia which, if not blown, is hit, rattled or shaken. With an array of 12 of the best Finnish jazz musicians and up to 15 instruments at his disposal, Innanen's compositions follow a similar style to his other work. He introduces themes and motifs via all of these instrumentalists at different spots during his compositions, orchestrating proceedings with waves of his own instrument, leading the colorful rabble by the neck. On this occasion, most of the pieces were taken from the band's album, in addition to his most recent composition "Phrygia," throwing multiple musical references to the audience, from New Orleans Mardi Gras to 1930s Hollywood, before pulling the carpet from under our chairs and making us reach for our ear-plugs!

The effect is a musical spectacle, something of a carousel of themes or figures conjured usually by two of the same instrumentalists improvising with each other, or at least following Innanen's instructions. Obviously much was scripted, illustrated when the leader changed the running order late in the program and had to scurry between players whispering instructions of sheafing thru sheets on the music stands. But the overall effect was of top-of-the-range musicians relishing occasional improvisation while being stretched to their limits, and enjoying the challenge. Onstage there was much sharing of insights, and presumably jokes, while different combinations of the twelve took their turns in the limelight. Innanen was powerful with his saxophones, but this is an act that favors the bold, and none of those on stage were left wanting.

The previous night, the small cafe Sävy (a word meaning flavor, slant or even implication in Finnish) was host to just three musicians, but filled with a similar sense of cutting edge excitement. Swedish saxophonist Otis Sandsjö is a supreme exponent of circular breathing, enabling him to produce an endless stream of music that can last for minutes at a time. This, in combination with a method that exploits the overtones inherent in any blown instrument, leads Sandsjö to play in a style unlike most others, overblowing his saxophone to create a sound almost like sitar and accompanying drone. His repeated patterns were countered on keyed sound sources by Aki Rissanen (known locally for his accomplished piano compositions and performance) and on drums by Tomi Leppänen. The music built from minimalist whispers, through compounded structures, to mesmeric trance-scapes, led by Sandsjö's own free-flow of melody and improvisation

Other venues for this mid-winter festival of sound saw Mark Turner playing with his Quartet, trumpeter Jukka Eskola playing with his Soul Trio at the Finnish National Theater, and veteran local jazz activist and poet MA Numminen opening proceedings, not to mention stellar shows by saxophonists Timo Lassy and Jukka Perko, pianist Aki Rissanen, and other leading Finnish acts. Hopefully Nives has time to recover over the seasonal holiday having brought such a pageant of music to the dark streets of Helsinki, especially welcome during this year's snowless, 'black Christmas' period. After four successful years mixing local and with a dose of imported talent, he and We Jazz have established a sparkling musical niche that adds a twinkle to more than just the bitter Scandinavian winter skies.