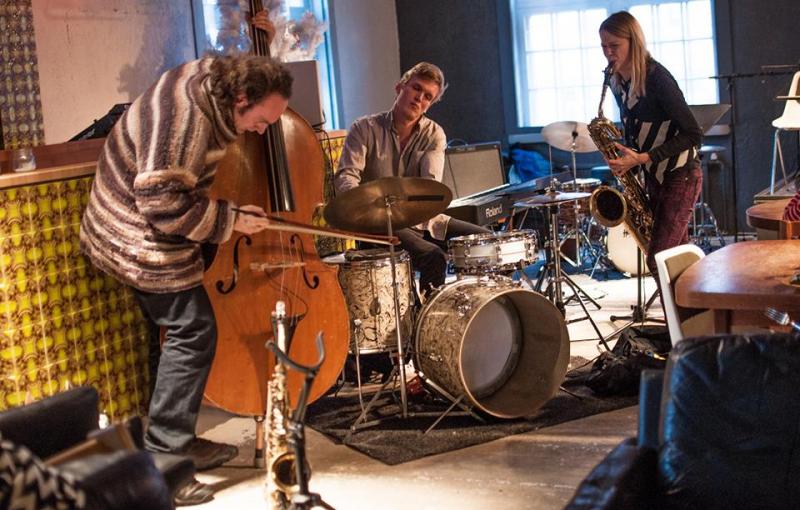 BY ANTHONY SHAW
December 19, 2014
Sign in to view read count

Nothing except the air quality was less than scintillating
&#151Anthony Shaw

Music festivals nowadays come in all forms of venue, from ocean cruise boats to desert retreats, and in between all the other varieties that we all know, from smoky bars (there must be some left somewhere) to concert halls. However Helsinki Finland has just witnessed a new form of program, trialed last year in many of the similarly alternative venues, and with a similar ethos. Promoter Matti Nives describes the event as more of an installation, even a utopia, offering audiences new musical experiences in new places, rather than a formal festival. It is known as We Jazz 2014.

As with a normal festival scenario, the roster featured a selection of foreign guests. The prime acts included Logan Richardson, Avishai Cohen and the Treveni Trio, the German trombonist Nils Wogram. The bulk of the artists though were younger Finnish acts, known from the scene around the Finnish capital and familiar with many in the audience. However the difference with this program was to take the music to less conventional venues and confront the wider populus with it. That said, having once (at least) been described as annually adopting a psychotic mindset when the daylight hours reduce to about six during the deepest midwinter period, the local Finnish audience might be expected to respond unfavorably to this plot.

Needless to say though, all seven official venues scattered around the city were well attended, from the former opera house, the Alexander Theater, to clubs such as Siltanen or Ääniwalli and so were the range of alternative sites in between. Tatu Rönkkö plays drums with the many of cutting edge Finnish artists, but this time took his solo performance to five private kitchens, offered for the purpose. Local resident Charles Gil still marvels that there were 24 people in his kitchen, and nothing except the air quality was less than scintillating.

Maybe the most ambitious of all the offbeat venues were those that formed part of the 24-hour blitz performed by local saxophone trio Mopo. They toured the city playing gigs on every hour, starting in Radio Helsinki studio, including a nearby shopping mall, a taxi rank, a falafel cafe and ending at the unofficial We Jazz headquarters, in the classic café-bar Siltanen. As all marathoners know, the toughest section is that before the final goal creeps into sight, with probably their best set performed at 11 am on Saturday morning. The whole program ended in the same building at the end of the following night's show, leaving the audience still some time to knuckle down to preparations for the serious business of Nordic Christmas celebrations.