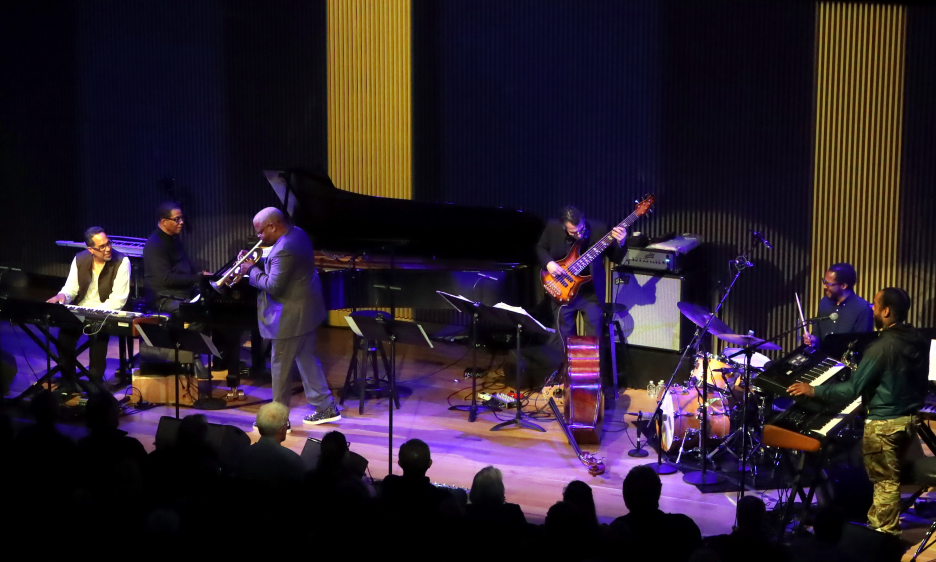 Wayne Shorter could not be there but his trio made it. When illness prevented Shorter from making a four-night stand at SFJAZZ, organizers turned the dates into a celebration of his music.

There are few better choices to kick off such an event than Shorter's longtime friend and collaborator Herbie Hancock. A trained classical pianist, Hancock performed with the Chicago Symphony at age 11 before making his inimitable mark with electronic jazz-funk bands. In addition to playing with Shorter in the Miles Davis quintet, Hancock also recorded 1 + 1 (Verve, 1997), a duet CD with Shorter. Hancock has also written an autobiography and was even appointed the 2014 Charles Eliot Norton Professor of Poetry at Harvard University.

In addition to Shorter's trio (pianist Danilo Pérez, John Patitucci on acoustic and electric bass, and drummer Brian Blade), Hancock invited alto saxophonist, rapper, keyboardist, and the producer of his forthcoming album Terrace Martin as well as renowned trumpeter Terence Blanchard to join the effort. The four-night series featured a distinct set of artists each night, and this first evening included Kamasi Washington and Ambrose Akinmusire.

As the ensemble took the stage, Pérez reached inside his black Steinway grand piano and plucked its strings to mark the beginning of "Masqualero." Hancock sat studiously in front of his Kronos Korg synthesizer while the white-haired Blanchard blew impressively and expressively, his tennis shoes sparkling in the light. Blade skillfully employed mallets. Martin contributed expertly on alto and keyboards. Then it was Pérez's turn to enthuse on his piano, with added pyrotechnics from Blade as Blanchard looked on.

Hancock switched to piano for "Fall," then Blade chimed in and Blanchard shined. The bass's interplay with the piano sent waves of tone over the audience as Pérez added to the mix on the Korg. Pérez began the Shorter classic "Nefertiti"with some synthesized riffs, while Patitucci bowed his head while he fingered serenely. Blanchard's trumpet came back in as the piece ended. "Visitor From Nowhere," from 1 + 1, found Pérez playing with passion as Blanchard added mood and resonance. A Hancock/Pérez duet on "Diana" and the classic "Footprints" rounded out the set. Vociferous applause brought them back for a spirited "Adventures Aboard The Golden Mean" with Hancock on keytar and Blanchard offering stellar synthesized trumpet.

At the end of this memorable evening, Hancock took up the microphone and expounded about Shorter. "This is actually a night of celebration. This guy is amazing. He's been through a lot lately, healthwise. Wayne never gives up...His compositions never, ever, get old."