By David Adler
February 1, 2000
Sign in to view read count 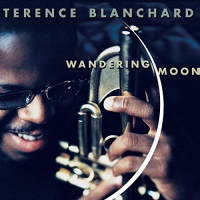 It’s been five years or so since trumpeter Terence Blanchard released a record of straight-ahead, small-group jazz, and it was well worth the wait. Blanchard has spent a good deal of his time scoring Spike Lee’s "joints" and other films. As a result, his orchestrational chops exceed those of the average jazzman, and it shows throughout this fine album. The three-horn writing is impeccable. The flow of the music is also quite cinematic. And as far as the blowing is concerned, Blanchard has lost nothing. His bright, expressive trumpet tone is the disc’s guiding light.

Blanchard wrote most of the material for Wandering Moon, except for pianist Edward Simon’s minor-key waltz "The Process" and a Miles-faithful ballad reading of "I Thought About You." Blanchard’s tunes often bear a resemblance to some of Wynton Marsalis’s early work — colorful, contemporary changes hung around propulsive swing, latin, and waltz tempos. There are also nods to the free vocabulary being explored lately by Branford Marsalis and Jeff "Tain" Watts: "If" and "Joe & O," both of which feature Branford as a guest soloist. The record begins, however, in slow and stately fashion with the translated title track, "Luna Viajera."

Dave Holland contributes one of his trademark unaccompanied bass soliloquies to introduce the pretty waltz "My Only Thought of You," which includes strong solos by Simon, Blanchard, and Branford, as well as impressive time-feel manipulation by drummer Eric Harland. "Simplemente Simon," a hip latin groove in seven, is also a showcase for the hot rhythm team of Holland and Harland. Tenorist Brice Winston gets in some good licks as well. Blanchard’s elegy for Harry "Sweets" Edison, titled "Sweet’s Dream," sounds the strongest echoes of Wynton’s early writing, as does "Sidney," an excellent mid-tempo burner.

Luna Viajera; If I Could, I Would; Bass Solo; My Only Thought Of You; Simplemente Simon; Sweet's Dream; Sidney; The Process; Joe & O; I Thought About You.