Wally Schnalle and his quartet made its debut at the Douglas Beach House and once underway, everyone in the house knew that a hard hitting jazz-fusion band had arrived. In an appearance celebrating the release of his newest album Out of the Pan (Retlaw, 2010) drummer Schnalle (who also composed, arranged and produced the CD) was joined by Jeff Massanari on electric guitar, Dann Zinn on tenor sax and Jason Muscat on the electric bass. 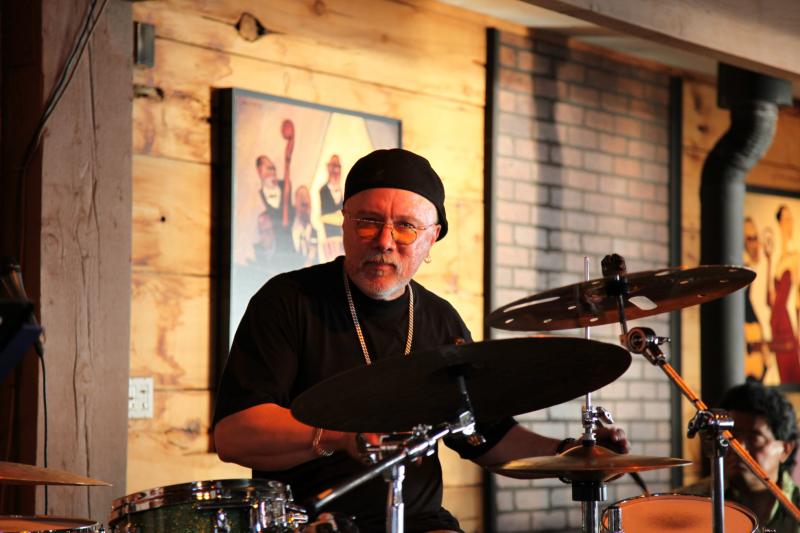 The first number "Side Step" seemed like a warm-up for the band, as it took a while for the four of them to hit the groove. However once they did, they remained tight and by the second tune "Out of the Pan" they had jelled into a unit. From there the power of Schnalle's jazz-fusion took the audience on a high-powered musical adventure, interspersed with periods where the band eased off, giving themselves and the audience short moments to breathe before soaring again. This quartet's ability to come on hard with rockish elements and then suddenly caress the audience with unexpected delicacies kept everyone on the edge of their seat.

One of the more interesting areas of Schnalle's compositions was the variation displayed between recorded pieces on the album and what was played during the concert. As a striking example, in the live rendition of the tune "You Don't Even Know" sax-man Zinn opened the piece with an intricate solo followed by Massanari's guitar somewhat echoing the pattern of notes from Zinn's sax. It wasn't until almost a third of the way through the piece that Muscat on the electric bass and Schnalle on his drums eased in to join them. In contrast, on the CD everyone is there from the beginning. There were other places too, in other tunes where striking variations—due to well developed improvisation—enhanced the quality of the number.

Some of Schnalle's compositions are highly complex, especially when it comes to the intricacies of the sax—however Zinn was eminently capable of handling these complexities. Schnalle danced hard on his jazz drums much of the time, but when he wasn't digging in, his delicate use of cymbals and rim-shots added volumes to his tunes. His controlled speed is rather refreshing, marking him as a well seasoned drummer in contrast to those who slam at their drums simply trying to show off their speed. Massanari's electric guitar ripped and Muscat's electric bass hung in tight, backing the rest of the group.

As the final notes of the evening were played, the audience rose to their feet with an applaud that filled the boutique venue, the Douglas Beach House. Live, this is a high energy, fast paced jazz fusion unit. This is a seasoned band, one that you can come back to time and time again and always find something new in the music. Wally Schnalle and his quartet come highly recommended.