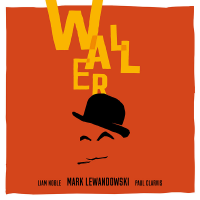 Thomas Wright 'Fats' Waller was born in New York on May 21, 1904 and died in Kansas from pneumonia on December 15, 1943 at the tragically young age of 39. During his relatively short life he became one of the most popular entertainers and composers in the USA and Europe. His stride piano style was greatly appealing and like his contemporary Louis Armstrong propagated jazz into the wider public domain. But it was this instrumental talent combined with his inimitable vocalisation of popular songs that secured his place in history. Some of his major hits, including "Ain't Misbehavin'" and "Honeysuckle Rose," have taken their place amongst the classics of the great American songbook.

Any reinterpretation of Waller's music is to be welcomed and although Liam Noble and Paul Clarvis are no strangers to the free improvisation scene, as well as the contemporary jazz scene, the tracks presented here are in no way as extreme as the revisions of those found on Derek Bailey's Standards and Ballads. However, as instrumental readings they add a new dynamic and depth to old favourites, many of which will be unfamiliar to younger listeners. Originally from Nottingham, bassist Mark Lewandowski, a graduate of the Guildhall School of Music and Drama, and tutored by virtuoso bass players Steve Watts and Michael Janisch, is relatively new to the London jazz scene.

Underpinned by Clarvis's deft brush work throughout and Noble's vibrant piano, the numbers jump out at the listener, very occasionally embellished by small snatches of sampled original recordings. The opener "Lulu's Back In Town" is irresistible and the trio is instantly recognisable as a truly swinging unit. It can also be delicately graceful, as is heard on the melody to "Jitterbug Waltz" or on the ballad "Cinders" which offers Lewandowski an opportunity to turn in a rich and sonorous solo. "Fair And Square In Love" has a ponderous melancholic feel, executed at a deliberately hesitant pace, adding to its charm.

Clarvis gives a jocular coconut shell/tap dancing style percussive break in "It's a Sin to Write a Letter," a medley of "I'm Gonna To Sit Right Down And Write Me A Letter" and "It's A Sin To Tell A Lie." Another medley combines "(I'll Be Glad When You're Dead) You Rascal, You" with "Oh Suzannah." The final number, a bonus track of sorts, is Jelly Roll Morton's "Why?," renamed here as "Surprise Ending." Lewandowski gives a vocal (and whistling) performance here, and arguably this might have been a track too many. That minor aberration notwithstanding, this is a robustly attractive album and judging by this first foray, we'll be hearing a lot more from this talented bassist in the future.

Lulu’s Back in Town; I’ll Be Glad When You’re Dead…Suzannah!!; Jitterbug Waltz; Blue Because of You; Fair & Square In Love; Cinders; It’s a Sin to Write a Letter; Have a Little Dream on Me; Ain’t Misbehavin’; Honeysuckle Rose; Surprise Ending (Why?).