By NENAD GEORGIEVSKI
July 1, 2013
Sign in to view read count 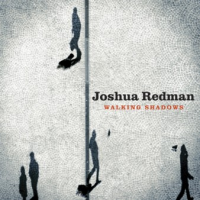 Saxophonist Joshua Redman combines some really attractive virtues: deep jazz knowledge and formidable technique on his instrument. Combine this with a balanced but slightly assertive style that is a prime example of fluency and inventiveness, and you have a musician of such intelligence and energy, who is so adaptable, that he easily finds a way to make himself at home in any given musical surrounding. As such, Redman is perfectly suited to performing with large ensembles.

The orchestrations on Walking Shadows are gorgeously rendered landscapes against which Redman and his quartet play.. Produced by one-time Redman sideman, pianist Brad Mehldau, Walking Shadows assembles a gentle, sultry, and extremely elegant collection of ballads with a wide array of choices. Redman has always possessed such a profound grasp of the tradition and, on top of that, a profound ability to reshape it. This riveting collection cherishes timeless tunes like "The Folks Who Live on The Hill" and "Lush Life," but it also indicates a broader taste, like The Beatles' classic "Let It Be," John Mayer's "Stop This Train," and Bach's "Adagio." The epic arrangements provided by Mehldau, Patrick Zimmerli and conductor Dan Coleman bring a cinematic quality to the album's treatment of these classics, which breathe and swell as they cajole and interact with Redman's affable sax.

Bach's mournful composition sounds like a late night conversation between saxophone and bass, with drummer Brian Blade's unobtrusive brushes adding a sense of drama without breaking stride or upsetting the tune'snocturnal balance. "Easy Living" and Wayne Shorter's "Infant Eyes," with their colorful and lush arrangements, sound like a film soundtrack, with sensuously swaying sax lines that give the overall album an old- time flavor. Redman's original, "Final Hour," is a sad lament, supported by Mehldau's minimalistic piano, balancing the leader's brooding melodies.

That this stellar cast would opt for a more spearheaded approach might be expected, but none of them rocks the boat or disperses with the recording's cinematic feel. It really takes a wise accompanist to distinguish between applying a personal stamp or serving the compositions as an effective ensemble player. Mehldau maintains an uncharacteristically discreet presence on the record, and his own "Last Glimpse of Gotham" features sweet, poignant string writing, with Redman adding a deep wistfulness to make the music seemingly evoke another time and place. The lush, sensuous strings give it strength, as it swells to near-majestic proportions and then, suddenly, subsides. The record closes gracefully with Redman's original, "Let Me Down Easy."

Walking Shadows is an emotionally charged, wonderfully seamless slow burn of an album that is a great work of art. It points not only to Redman's ability as a performer and composer, and his taste for diverse material, but also to the depth of his heart and how well he listens to his own Muse.

The Folks Who Live On The Hill; Lush Life; Stop This Train; Adagio; Easy Living; Doll is Mine; Infant Eyes; Let it Be; Final Hour; Last Glimpse of Gotham, Stardust; Let me Down Easy.