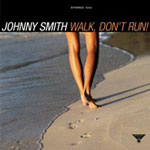 Woefully obscure and unlauded today, Johnny Smith's early '50s recordings make him as important to the development of jazz guitar as his contemporaries Stan Getz and Al Haig are to the history of the tenor saxophone and the piano. Johnny who?

For a very short while, Smith was a star. His '52 single "Moonlight In Vermont," featuring Getz, came out of nowhere—Smith was then an anonymous staff musician at NBC, New York—to become a massive coast-to-coast US radio and vinyl hit. Downbeat voted it record of the year. After that, despite recording half a dozen of the most transcendentally beautiful guitar albums you'll ever hear, Smith rapidly faded from view. Partly this was his choice: he preferred working as a staff musician for NBC to carving a living on the New York club scene. By the early '60s, he'd had it with big cities altogether and—his bank account high on composer royalties from the Ventures' twang rock cover of "Walk, Don't Run!"—relocated to Colorado. The fifteen minutes were up.

At last, after decades of unavailability, Smith's A-list recordings are becoming obtainable again. Last year, Roulette reissued the defining '52/'53 singles and 10" collection Moonlight In Vermont, and now the every bit as timeless and magical '54 set Walk, Don't Run! is back in the racks.

Smith's technical and harmonic mastery are both awesome, and his instantly recognisable style is characterised by lush, complex, legato chordal voicings, interspersed with lightning-fast runs, all executed with a rich, lustrous sound and precise articulation. Yet he doesn't use technique as an end in itself, only to extract the last filigreed nuance of beauty out of a melody or a chord progression. Apply all this to some of the most shimmering tunes in the Great American Songbook and you are definitely knocking on heaven's door.

Most of these tracks last little more than two and a half minutes—the length of an average theme statement today. Yet such is Smith's eloquence and focus, that he can make time stand still and give a forty-five second solo something of the substance of a Shakespearean sonnet. Arnold Fishkin and Don Lamond, held over from the Moonlight In Vermont sessions, provide unobtrusive but intelligent accompaniment, as does second guitarist Perry Lopez. It would be ridiculous to single out individual tracks for special mention—though did "Lover Man" ever sound more smitten or "Autumn In New York" more romantic?—for every one is a miniature masterpiece.

Walk, Don't Run!; Sophisticated Lady; I'll Remember April; What's New; How About You?; In A Sentimental Mood; Stranger In Paradise; Someone To Watch Over Me; Easy To Love; Lover Man; Autumn In New York; 'S Wonderful; Our Love Is Here To Stay; Lullaby Of Birdland.